Rejection of Pipeline Proposal and Shutdown of Grasberg Mine in Indonesia: different events, one common cause?

Home / Blog & News /Crisis management /Rejection of Pipeline Proposal and Shutdown of Grasberg Mine in Indonesia: different events, one common cause?

Rejection of Pipeline Proposal and Shutdown of Grasberg Mine in Indonesia: different events, one common cause?

Rejection of Pipeline Proposal and Shutdown of Grasberg Mine in Indonesia: different events, one common cause? Two news have triggered the writing of this post:

It has been less than one month since we published a post on our recent conference in Toronto where, the third point reads “You will not be allowed to operate if people do not believe, trust and understand you and your risks.”

If you read our post thinking that may be we, at Riskope, are too wary, now you have the proof we were bang on. Let’s go back to possible common causes of the Pipeline proposal and mine shutdown and see if they could be avoided.

Possible common causes of the Pipeline proposal and mine shutdown

Over the last five decades or so, the risk management community at large, including engineers, designers performing Risk Assessments on their own projects/designs, oftentimes in a conflict of interest situation, has settled on representing the results of Risk Assessments using so-called Probability Impact Graphs (PIGs risk matrix). PIGs risk matrix are ubiquitous, but have a number of staggering intrinsic conceptual errors, with potentially significant negative consequences on their users (NASA 2007). ISO 31010 international code, after giving a detailed “non partisan” description of PIGs risk matrix, details their limitations including their very subjective nature, difficulties in prioritizing risks across systems and a tendency to underestimate risks. Technical literature has begun to specifically address PIGs risk matrix logical and mathematical limitations (Cox et al. 2005, Cox 2008, Cresswell, Hubbard 2009, Chapman,Ward 2011, Oboni, Oboni, 2012). 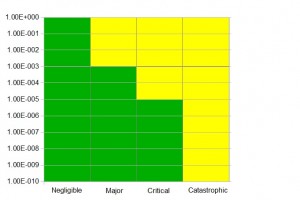 Probability Impact Graphs (PIGs) risk matrix are ubiquitous, but have a number of staggering intrinsic conceptual errors, with potentially significant negative consequences on their users.

Engineers and designers persist in using PIGs risk matrix improperly to perform tasks they are not foreseen to perform. They may keep ignoring the conflict of interest that underlies a designer performing a risk assessment on their own design. However, we can foresee that soon  courts of law will hear cases against these practices. This will include rejected projects, like the Enbridge pipeline, or operations to be shutdown, like Grasberg mine. We gave a list of embarrassing questions that could be asked in court to PIGs users in this post.

Regularly, when presenting a project (pipeline, mine, powerplants, etc.) to the public, risks show-up through a “narrow angle” approach. Proponent separate “engineering”, “long term”, and “toxicological” risks. Holistic approaches are uncommon, especially if designers/engineers perform or are too close to the Risk Assessment consultants. As a matter of fact this almost inevitably leads to conflicts of interests and biases. Separating issues is intrinsic to good engineering practices, training and experience, while remuneration of engineers oftentimes prevents “thinking about the unthinkable”, an essential need for serious risk assessments.

As a result, risk assessors almost always censor and bias their analyses towards “credible events”. These omissions have entered in the radar screens of public authorities and even the public.

History, even recent, shows that major failures occur when “incredible events” occur. Another cause are long chains of apparently benign events. The public has got that clearly in mind. Of course, the biased/censored approach becomes even more critical when one considers long term (perpetuity). For the question is to define a maximum credible scenario on a project that will be present for perpetuity (mining tailings, for example).

At Riskope we have deployed approaches ranking risks as a function of their intolerable part since the early 2000 (Oboni, Oboni, 2007, 2012). The intolerable part is the “amount of risk” deemed intolerable for a specific project, endeavour, etc. Riskope’s deployments occur in lieu of biased and censored “binning risks” in PIGs. We have successfully carried them out in various industries, including mining .

These approaches (ORE: Optimum Risk Estimates ) compare the relative value of the intolerable risks. This leads to a rational, transparent prioritization, while defining drillable hazard and risk register. The final result is a clear road maps for mitigative decision making.

ORE can grasp these using simplified methods while considering the wide uncertainties that surrounds the driving parameters.

Avoiding oversimplification of consequences with ORE

Recommended consequence models should include (WBGU, 2000):

In contrast to PIGs risk matrix users, replies that ORE users can give if asked to justify their doing are far from embarrassing, they are transparent and rational. Were published a list in the following post.

Any business, any where should run away from obsolete practices and spouse better ones, in full compliance with ISO 31000. Contact Riskope to know how you could get started right away: ORE will build on your present risk register.