Thirty years ago, on January 28th, 1986, the world watched speechlessly the explosion of Challenger space shuttle, a minute or so after lift-off. Seven crew perished in the accident. Based on this tragic failure, what can we learn from Leadership, Challenger explosion, Winston Churchill and overwhelming syndrome?

Later, investigations determined that an o-ring failure in one of the rocket booster and cold weather were the root cause and ancillary factor for the explosion.

Earlier, an engineer working at the manufacturers of the solid rocket boosters had written a note to the company’s Vice President. He lamented that: 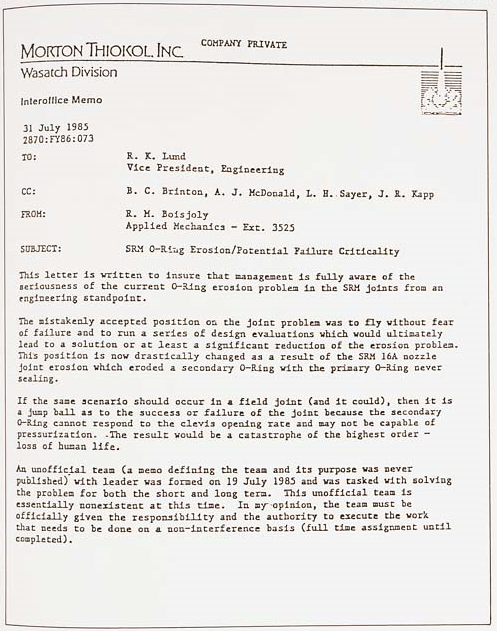 Nobody took action. When the engineer R. M. Boisjoly revealed his memo to the investigators the company forced him to leave. His efforts were finally recognized in 1988, when he received the AAAS Award for Scientific Freedom and Responsibility.

We do not know what happened to the company’s VP. However we know that his inaction, digging the head in the sand, costed the lives of the crew. Furthermore he created a huge blow to the NASA image and a fatal hit to his company’s reputation.

It comes spontaneous to compare his behavior to the one of one of the most admired leaders of the last century, Winston Churchill.

Leadership requires bold, convincing and transparent communication. Churchill knew this principles and was able to unite the British people and support their incredible effort against the 3rd Reich with his powerful messages. Churchill’s commitment to the truth, even if it was unpopular and bad news, was key to his leadership. The VP was far from those lines which define a true leader. The message seems to have trickled and is even advertised as a “corporate quality”. No one can actually know how many bottom-up signals actually reach top management. No one knows how many receive proper consideration. However, it seems that many accidents  (BP, Mount Polley, Brazil) feature a mix of inaction and lack of clear communication.

The problem is that people may express “fears” like Mr.  Boisjoly did. Those “fears” can be difficult or even impossible to be understood by a VP. Likely his/her judgements are clouded by prejudices and misconceptions) and then he/her may suffer from overwhelming syndrome.

A leader must not only communicate the vision with passion and excellence. As a matter of fact the leader must also develop transparent plans of action which clearly define tactic, strategic moves, their reasons and risks.