Tailings dam failure at the Cadia-Ridgeway Mine in Australia

Tailings dam failure at the Cadia-Ridgeway Mine in Australia

We learned last week about a tailings dam failure at the Cadia-Ridgeway Mine in Australia.

We are going to discuss a few points we know as they relate to Tailings Dams Risk Management.

In the late afternoon of Friday March 9th , Cadia identified a limited breakthrough of tailings material at its northern tailings dam embankment as shown in the press release they produced.

This tailings release remained contained within the southern tailings dam.

The Cadia tailings dams were reportedly the object of regular inspections, reviews and monitoring. They have also been fully certified to industry standards by independent third parties.

As a precaution Newcrest stopped depositing tailings into both dams on March 9th . They stated:

We actually do not know anything beyond the summary above, but it is not important for today’s discussion as we want to focus on tailings dams’ seismic analyses.

We do not know how the engineers evaluated the dams at this mine from a seismic point of view. It is public knowledge that the mine temporarily closed last year after a magnitude 4.3 earthquake hit. Furthermore, reportedly, a couple seismic events occurred in the region prior to last week failure.

We also know that forensic investigators/independent expert panels oftentimes invoke the possibility of “minor quakes” as triggers of tailings dams failures. For example for the Samarco tailings dam, the panel found that three small seismic shocks “triggered” the collapse. The panel also indicated the dam’s failure was reportedly “already well advanced”, caused by a string of design and maintenance failures.

Common practice for seismic pseudo-static analyses for tailings dams would be to:

Let’s note the minimum FoS under those conditions may be as low as 1.1.

The approach described above is absolutely common and trusted without hesitations by basically any engineer and regulator we know.

So, assume for a minute a considered dam is designed for a 1/2500 earthquake, with a corresponding PGA of 0.075 (g) and the selected 50% PGA value as horizontal acceleration. The 50% “rebate” is allotted because the foundation soils are of good quality without really wondering how localized geological variations may influence that quality.

For the sake of this discussion we have calculated for this blogpost the downstream slope FoS for the:

We used two different approaches for the evaluation.

Now comes the big point of this discussion. Actually, the static case occurs “every year”, right? But the 1/2500, well, in first approximation does occur “only” 1/2500. Please forgive us for this gross approximation and remember that two 1/2500 quakes are always possible in the same year….

What that means is that actually the probability of failure under seismic event is a conditional probability equal for example to pf1/2500 divided by 2500 and respectively pf1/100 divided by 100.

Here is a graphic showing the results of the specific example we have discussed. Note it may not apply as a general rule! 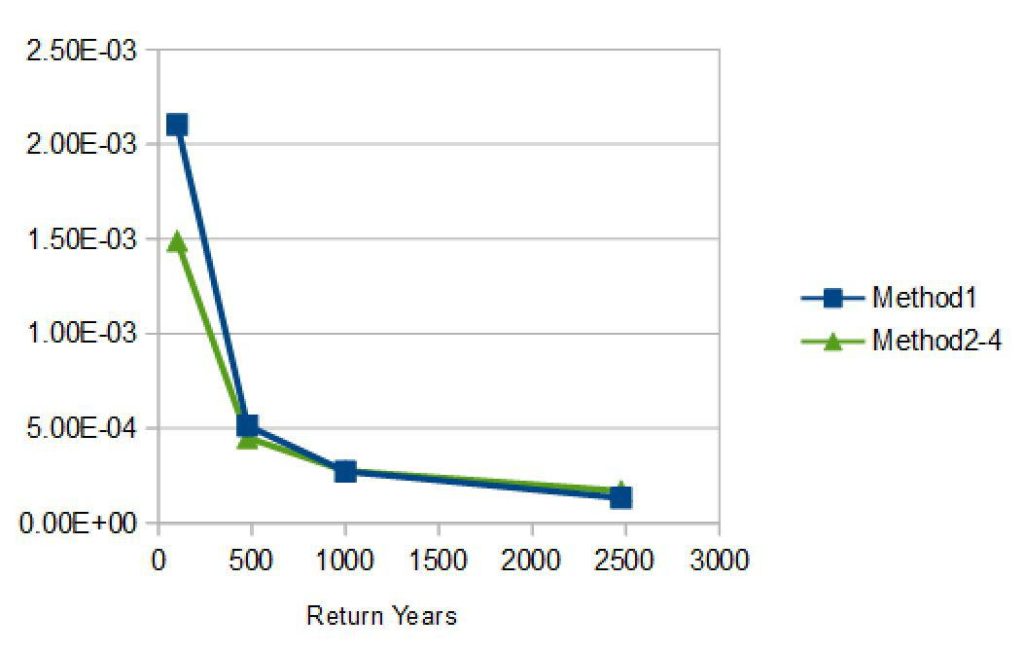 The implications for design are simple: one has to check the dam slope for high frequency, less intense events.

That may be a way to avoid what happened to many dams that actually failed.

Contact us to learn how we can do this analysis with your engineers.