Two trailers following each other collided. One of them was loaded with liquid propane. Those two then reportedly hit a third trailers loaded with new cars. The accident happened on a viaduct going through a semi-industrial/ urban environment.

A fire started in the car transport trailer. By chance, several police units were either onsite or nearby and officers immediately started stopping and diverting traffic both on the highway and in the streets under the viaduct. Their heroic action, which certainly imperiled their lives, as it sadly became clear later on, saved scores of people.

Once the fire developed, after a certain time, a very large explosion occurred. It was a blatant case of BLEVE  or Boiling Liquid Expanding Vapor Explosion.

The BLEVE blast collapsed the viaduct span on which the highway accident came to a stop. Debris and pieces projected like rockets hundreds of meters away. Windows exploded. A nearby car dealer’s parking caught fire and the blaze destroyed all the cars for sale. Several nearby structures were damaged to various degrees.

One of the drivers died, 145 people were wounded, with 18 hospitalized and two severely burned. Of the hospitalized 13 were brave policemen. We just learned one of the wounded persons died yesterday. Our thoughts go to the victims, to those who suffer and to their families. Our gratitude goes to the brave men who bravely saved so many people.

A “cold” though on Probabilities

Many may want to say that this accident was an “incredible” event. Many may say that such an event should therefore be ignored in a risk assessment.

Is it really so?

Pileups on Italian highways are rather common occurrences.

Almost 40% of all accidents on highways are due to unsafe distance between vehicles leading to rear collisions like the one in Bologna. One can argue forever if the root cause was distraction of the driver or not enough distance. We will not go there.

A few weeks ago one of us drove 600km on those highways and saw two minor and one major truck accidents, which included a severe spill of fuel, causing full closure of the south heading side of the highway.

Italian statistics show that approximately 3% of the 3,500 road casualties are likely truck drivers,, so roughly 100/year.

Perhaps half of the casualties associates with severe spills. This is now a quick and dirty assumptions we are making… it requires confirmation.

Now we need to make another big assumption: what is the proportion of trucks carrying gases vs. the total truck traffic?

From what we have recently read 5% seems like a good estimate.

Now, in order to get a BLEVE we need that accident to ignite a fire and the fire to generate a BLEVE.

Whatever the probability of that situation is  (even if it is as high as 1/5) a a BLEVE development stands at the limit of technical credibility, which is generally between 10-5 and 10-6 .

Time to look at consequences.

A though on Consequences

The description of the accident above clearly shows the multidimensional aspect of this accident consequences.

Any risk assessment that would have looked only at one of them (like common practice approaches generally do), would be totally misleading.

Looking only at the casualties, this accident is almost a near-miss, thanks to the heroic behavior of police forces. If we simply assume that without police intervention the wounded could have been casualties, the tally would be 145. 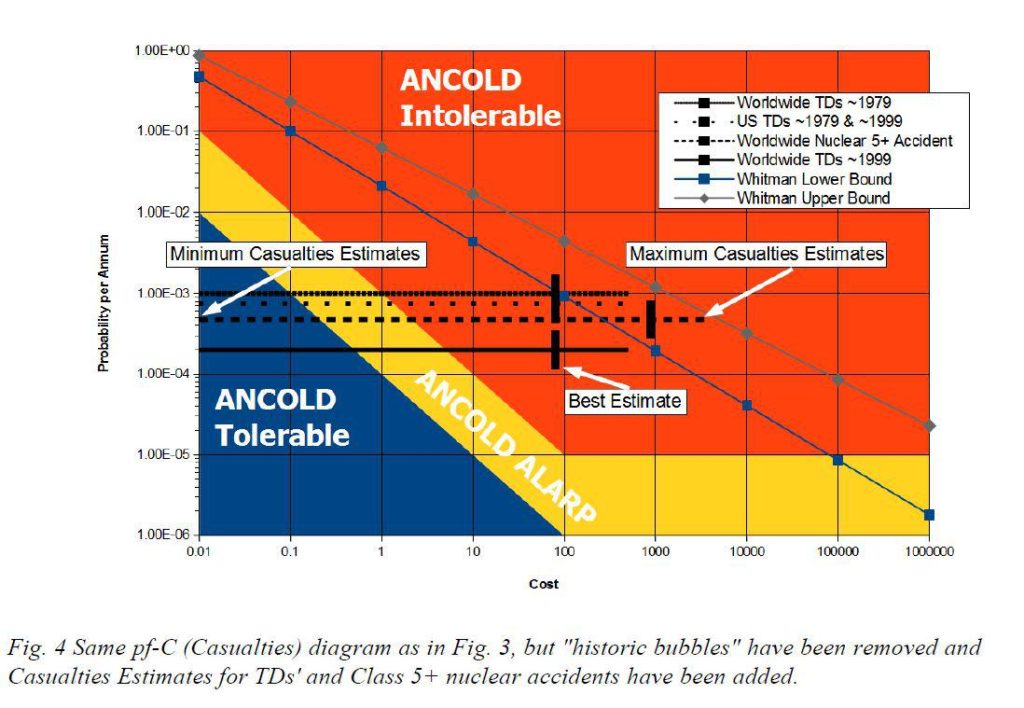 Now, if we look at commonly accepted life risk tolerance curves the risk evaluated above remains within tolerance and way lower than tailings dams, nuclear reactors, Whitman lower bound societal tolerance and ANCOLD. In this last case the accident falls in the ALARP (As Low As Reasonably Possible) risk region. Notably, it would remain there even if the number of victims would have been multiples higher.

Our thoughts immediately went to the victims and their families, the involved drivers, the policemen. The low number of victims (severe wounds) is almost a miracle, due, in large part, to the marvelous behavior of the police forces and the rescuers.

Once the emotions settled we felt the need to “dig into the numbers” from a rational point of view.

Based on preliminary assumptions, although horrible at first sight, this accident remains in the societally tolerable risk realm. That is even with more realistic consequences numbers.

Obvious mitigation is enforcing vehicles safety distance on the highways and avoid drivers distractions, like phone, fax, TV screens. These would be low cost measures. Thus, although the risk was tolerable, we would incite the Italian agencies responsible for Road Safety to act. Simply, but decisively, for the well being of society.