It is very saddening to report about the Highway Bridge Catastrophic Failure in Genoa, Italy just one week after the horrific accident in Bologna. The bridge, build in 1967 was a stayed pre-stressed reinforced concrete structure. Its futuristic design and lines drew comments from inception.

This time again we will not enter in any legal/political debate, but look at the tragedy with our risk management eyes.

We have decided to start the discussion using a few cognitive biases and misconceptions that visibly cloud the debate starting in the media.

Following a list prepared in 1995 by an historian there are about 900 Roman bridges scattered around the territories of the ancient Empire. From Libya to Germany, from Iraq to Portugal. Many of these structures are still standing and some still in service. It is easy to take these as an example of perpetual life, while ignoring how many bridges actually failed. It is a classic example of survivor bias.

Puente Romano, Mérida
It is the world’s longest (in terms of distance) surviving bridge from ancient times, having once featured an estimated overall length of 755 m with 62 spans.

It is true that the Romans made of the “ars pontificia” (bridge-making art) a sacred discipline lead by the Pontifex Maximus (Top-honcho bridge-maker). Incidentally, the Catholic Church used that title for their leader, the Pope, who impersonates a mystical link between Humanity and God.

It is also true that Roman bridges were the largest and the most durable of ancient times. For example the Bridge of Traiano, designed by Apollodoro of Damascus was over 1,000m long, 15m wide and lasted for over 1,000 years above the Danube, in nowadays Romania. Also, it was reportedly completed in an astonishingly short delay of two years. However, as stated above, we do not know how many trial and errors, how many failures, how many bridges failed by flooding, quakes, etc. during history. What we are seeing today are the survivors of a very large bridge portfolio and we should not use this as a metric.

Fast forward to the middle of last century

Mr. Morandi, the engineer who designed the bridge in Genova, designed bridges around the world. All over Italy, in Venezuela, and Libya. He patented post-tensioning of concrete beams in Italy (1948), one year after the Freyssinet patent in France (1947). We will not enter in the quarrel of who truly invented what and when. However, it is interesting to notice that the reinforced concrete industry was seeking to reach wider spans without the use of arches throught Europe, likely because in the aftermath of WWII steel was expensive and difficult to procure.

Records show that several Morandi’s bridges (we know of at least one in Italy and one in Libya) behaved very poorly and either collapsed or were the object of traffic restrictions. The Maracaibo bridge (Venezuela) partially collapsed when hit by a ship (no protective design for this loading case?).

Incidentally the Maracaibo bridge and the Libyan bridge featured, at least for the main spans, similar stayed solutions to the Genoa collapsed bridge. 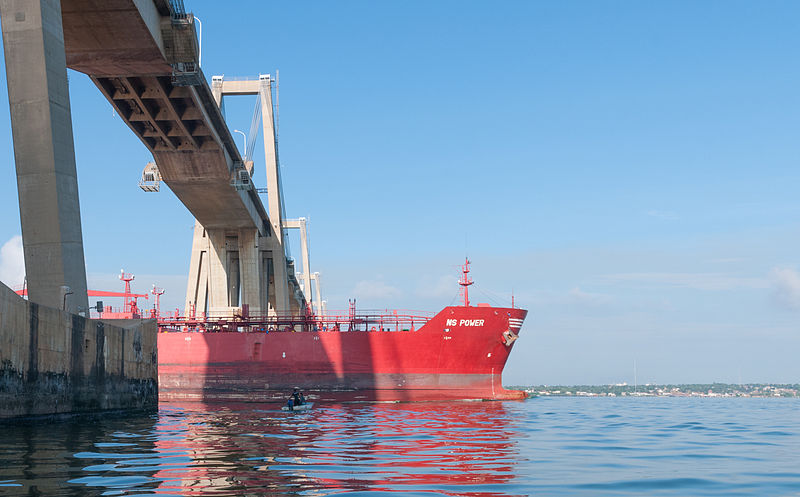 Considering that the failure of a bridge, especially a significant one, should be at the threshold of credibility (i.e. 10-5 to 10-6 per year bridge), even discounting the Maracaibo accident, the record of Mr. Morandi portfolio is orders of magnitude higher.

We are not here to posthumously blame Mr. Morandi, especially since it is not known what party is to blame for the mishaps, the design or the construction, or the necessary maintenance & monitoring. We have also read that Mr. Morandi warned that his bridge should have been the object of heavy maintenance already a decade after its construction.

However we can say that another cognitive bias may be to blame here.

The “I am different”, “not to me” bias or Overconfidence effect

The overconfidence effect is the fact that someone’s subjective confidence in his or her judgment is systematically and reliably greater than the objective accuracy of the judgment, especially when confidence is relatively high, and yet another example of how subjects fail to correctly calibrate their subjective probabilities.

So, there was a record of anomalous failures, collapses, near misses on similar structures with similar design. There were warnings by the designer himself.

Also, it is true the bridge was reportedly monitored and object of heavy maintenance since the beginning of its life (1967). That was because it presented deficiencies from inception. So, it seems that at least at the beginning rational and prudent behavior was prevalent.

However, a real-time monitoring was reportedly not deemed necessary by the highway manager (a corporation) even after an expert panel (Poli-Mi, technical university of Milan, 2017) declared the stays which ended up failing as worry-some. In addition monitoring of the bridge was carried out following “laws and rules” (means standard procedures which likely are “general minimum requirement”) by in-house personnel and in some cases by the engineering company owned by the highway manager.

Similarities with the mining world and other accidents

This is very similar to what happens in the mining world, and it is a clear case of conflict of interest cumulated with the so called “normalization of deviance” which has been cited as the cause of a significant incident at the Oroville Dam in California last year.

Nevertheless in May 2018 a 20MEuros heavy maintenance job was RfPs, likely to reinforce the stays that actually may have been the cause the catastrophic failure. The Courts of Law will decide if there was any criminal negligence. Today we may only wonder if the late reaction was the quintessential result of the Overconfidence cognitive bias. We also note that many mining failures saw last minute efforts to prevent them being consented when it was apparently way too late.

It occurs where people fail to adequately assess their level of competence — or specifically, their incompetence — at a task and thus consider themselves much more competent than everyone else. This lack of awareness is attributed to their lower level of competence robbing them of the ability to critically analyze their performance, leading to a significant overestimation of themselves.

Various voices raised in the past to claim the bridge was “risk free”, “situation was under control”, etc. mostly from non technical people, ambitious politicians, etc. If they were not dishonest, the less we can say is that they were victims of the Dunning-Kruger effect.

Rosy retrospection is the tendency to rate past events more positively than they were actually rated when they occurred.

Reminiscence bump— the effect that makes people tend to recall more personal events from adolescence and early adulthood than from other lifetime periods.

Anchoring— the tendency to rely too heavily, or “anchor,” on a past reference or on one trait or piece of information when making decisions.

Italy is a seismic country. New constructions are seismically designed with “mild success” (the school in L’Aquila, for example) only. Furthermore reportedly there is no upgrade program for old structures. We see a parallel with the status of the Italian bridge portfolio.

Indeed, we learn now that most bridges in Italy have gone beyond their service life and supposedly require replacement. Four bridges have collapsed (for various reasons) in the last four years:

That makes four catastrophic failures over, say, five years on a portfolio of perhaps 2,000 major structures. NB.: we have counted four collapses because the overpass failure was reportedly due to excess load by a heavy vehicle and the collapsed structure was not a major one.

That leads us to 4/(5*2,000)= 4/10,000 per year bridge which is more than two orders of magnitude higher than the credibility threshold a bridge should have (see earlier). We should of course confirm these numbers, but the order of magnitude should be right.

Italy built most of its bridges between 1955 and 1980, like most European countries in the reconstruction and modernization post WV II effort.

A very recent audit (not a risk assessment.) in France reports that says one third of the 12,000 government-maintained bridges are in need of repairs. Also, 7%, 840 bridges may present a higher than normal chance of collapse in absence of capital expenditures. We lack data to even attempt a rate of failure approximation, but the situation seems worry-some as well.

In North America we know the problem quiet well with:

What  issues do we need to considered for risk evaluations

Likely a set of issues. Based on my understanding of the situation, for example:

These days we read from the media inflamed statements by vendors of monitoring devices and technology claiming to have the “magic pill”. They seem to forget that  unbiased and rational risk based decision-making has to follow monitoring efforts.

Without that and without the understanding that fragile failure are generally mostly instantaneous (even in tailings dams) all their efforts are useless.

Now, the national portfolio of bridges has staggering proportion and its mitigation outrageously high costs. Audits are not sufficient to allow triage, prioritization.

What we need for a risk-based prioritization.

Without it, whomever will attempt to implement a national or regional program will be in a state of paralysis. Too many issues to fix, not enough funds to use.

The list of the elements that should enter in the quantitative risk prioritization include:

A rational risk assessment then evaluates the numerical probability of failure and the potential multi-dimensional consequences of those failures. That is before being able to determine which bridges are, at this time:

Tactical risks are those we can mitigate by reducing the probability of failure without changing the system. Thus they are the bridges we can repair and will offer tolerable risks in the mid-term future.

Strategic risks are those that require changing the system. Thus they are the bridges requiring replacement. A string of strategic risks may even suggest the replacement of an entire segment of a highway (alternative path).

The means to solve the Italian and other countries conundrum exist.

They have to be applied.