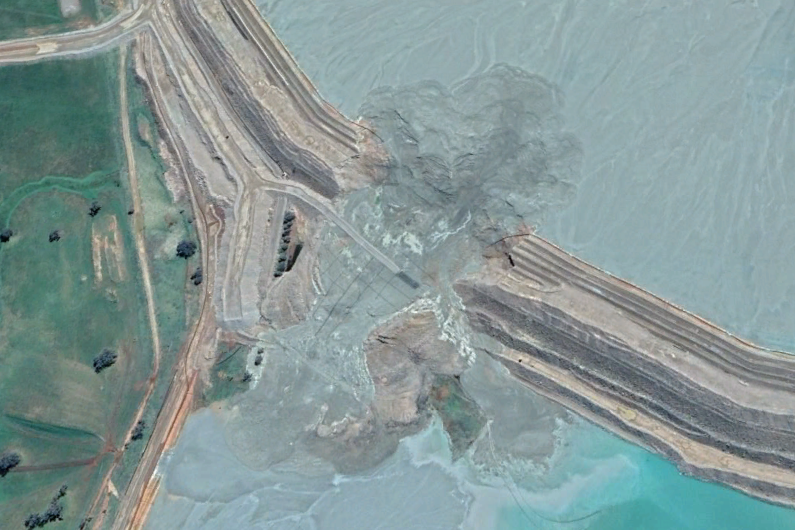 The Cadia Ridgeway Mine failure was already the object of a preliminary discussion in the immediate aftermath of the unfortunate event.

We were very pleased to see InSAR being referenced in the Expert review of Cadia tailings facility as we believe Space Observation data integrated with ORE2_Tailings will help solve many problems related to tailings dams portfolios risk prioritization and mitigation roadmap.

Of course, in the case of Cadia, InSAR data were used a posteriori, but they are nevertheless very interesting. The results displayed below come from Appendix G Deformation Analysis of the Expert Review (Fig. 2.13), available in the Newcrest website.

The ITRB had concerns “over the accuracy of the InSAR data because they did not match the surface survey data where these datasets overlapped and because the direction of displacement these results represented was not clear”.  Thus “these surface monitoring results were used for calibration of the deformation model in an indicative manner only. The main use of these data was to illustrate a significant increase in displacement rate in the three months prior to failure.” 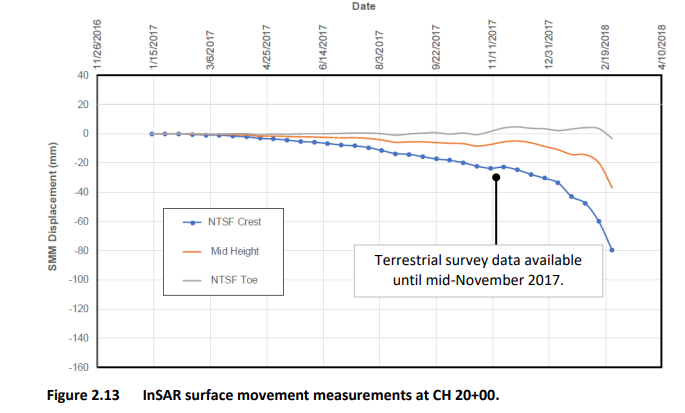 The report also states that a model was evaluated with FLAC delivering horizontal displacements close to measured values and as shown in Fig. 2.15 (of the same report) the displacements in the model can be seen to follow a similar trend as the InSAR measures. 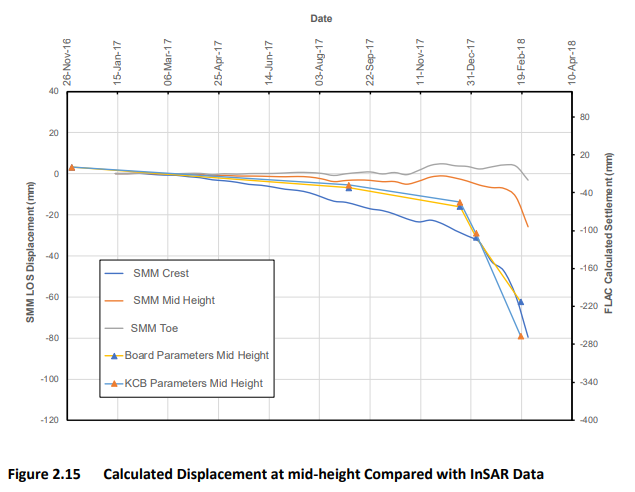 We will retain that the InSAR measures revealed a significant increase in displacement rate in the three months prior to failure and that there was a similar trend between calculated and InSAR measured displacements.

The focus of this blogpost is not to evaluate the stability and related probability of failure. The aforementioned report “revealed Factors of Safety significantly less than the likely design objective of 1.5… , and were often close to unity.”

Even considering fully drained conditions as the report suggests, the probability of failure of the dam would have been orders of magnitude above the historic benchmark.

Low seismic event and their effects

In Chapter 8 of the report we read that “There were two small earthquakes on March 8, 2018, the pulses being short bursts with a duration of about a second each separated by about 10 seconds. The instantaneous peak ground motion was about 0.15 g, which is a significant shock even though the duration of motion was very short.”

In our forthcoming book we quote a discussion we published in the immediate aftermath of Cadia failure. At that time we have not had access to any information about the dam except what was available in the media, but it is not important for this discussion as we want to discuss tailings dams’ seismic probability of failure. We did not know how the engineers evaluated the dams at this mine from a seismic point of view. We did know however (because it is public knowledge) that the mine temporarily closed last year after a magnitude 4.3 earthquake hit. Furthermore, a couple seismic events reportedly occurred in the region prior to the recent failure, as now reported by the expert panel.

Common practice for seismic pseudo-static analyses for tailings dams would be to:

Let’s note the minimum FoS under those conditions may be as low as 1.1 following some national codes.

The approach described above is absolutely common and unfortunately unhesitatingly trusted by basically all engineers and regulators we know. Let’s take a big risk here (pun intended) and question that credo.

Assume for a minute a given dam design considers a 1/2500 earthquake. The corresponding PGA is 0.075 (g) with 50% PGA value as horizontal acceleration. In some jurisdictions if the engineer considers the foundation to be good he can allot that 50% “rebate”.  For the sake of this discussion we have calculated the downstream slope FoS for the static case, ensuring it was code compliant; a 1/2500 earthquake ensuring again it was code compliant; and finally also a 1/100 earthquake, which, by the way has only a PGA of 0.012 (g). The codes do not ask for this probability and do not impose a FoS value for this type of “minor” events.

Now comes the big point of this discussion.

Actually, the static case occurs “every year”, right? However, in the first approximation, the 1/2500 does occur “only” 1/2500. Please forgive us for this gross approximation and remember that two 1/2500 quakes are always possible in the same year. This is also true for the 1/100 quake, and so forth. That means is that the probability of failure under seismic event is actually a conditional probability. It is equal, for example, respectively to pf1/2500 divided by 2500 and pf1/100 divided by 100.

In many cases there is no a priori warranty that pf1/2500 is larger than pf1/100. Actually the reverse if oftentimes true.

It is likely the yearly probability of failure of dams under minor seimic events is larger than under major events. That confirms what experts believe and repeatedly stated. A series of minor events can trigger dams’ failures. And, amazingly, that is true even in the case of Cadia, even without invoking liquefaction!

Tagged with: benchmark of tailings dams, cadia gold mine