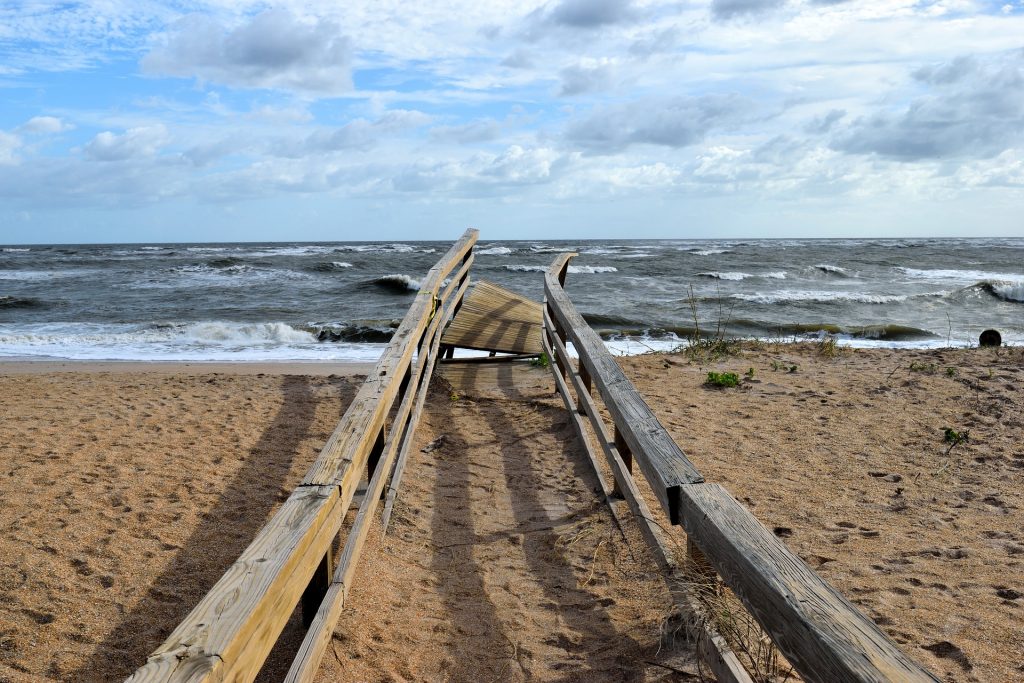 Because of the complexity of the issue, let’s start with a few statements.

Finally, climate change will generally alter the probability of “good old” localized hazardous events such as for example:

Recent papers show these changes. For instance, a Swiss-Norwegian publication shows that local daily temperature probability distribution has changed in the last 20 years. Correspondingly, the Russian plan to manage the risks and the effects on the Mississipi “economy” eloquently show the importance of climate change challenges and potential losses. 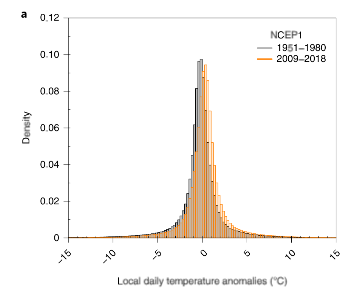 Any of the hazards above is likely to be already present in your risk register, provided it is the result of a step-by-step approach. That is after careful hazard identification on a well-defined system.

How to deal with Probabilities of climate change events

If we look at any of the “good old” hazardous events, here is a procedure leading to risk assessment.

Consider, as an example, the historical or “pre-climate change” probability evaluation at a specific location. The evaluation is likely a range, due to uncertainties, of say ±3-4C which are not even mentioned. That is because those uncertainties define the “business as usual” variation. For example, the max average summer temperature at a plant location may be considered 30C.

At this level (30C, business as usual), there are virtually no consequences, hence this is not a hazardous situation. Thus, we will adopt in this example nil consequences at “business like usual”.  Finally, we consider the return of such an average temperature at ten to five years (probability per year appx. 0.1 to 0.2).

Anything above the “business as usual” is considered a hazardous scenario. This means for example a hazardous average temperature of 35C. This will generate, under the assumptions above, a risk scenario for which we can evaluate both consequences and likelihood. In our example it comes with consequences (losses) of 10 M$. For the sake of simplicity, we assume the consequences are the same in case of warming or cooling. However, that may have to be carefully evaluated in real-life. Considering climate change events, models will tell you if the location is likely to see higher or lower temperatures. If uncertain, do both scenarios!

At 35C the probabilities will change. If the climate change goes colder the lower bound 0.1 will reduce. Indeed, the return of average 35C will be longer if climate becomes colder. Finally, it will be shorter if the climate goes warmer. Your group of experts will help you decide for example for a lower bound at 0.05, e.g. twenty years return. At the other end perhaps, you will decide to increase the higher bound from 0.2 to 0.3, that is from 5 years to 3 years.

In addition, you may want to evaluate other temperatures scenarios. Say, for example average extremes at 10C or 40C. Use the same approach, with experts, literature, models.

In our case we evaluated the following for 30C, 35C and finally 40C max summer average temperatures:

What about the risk evaluation?

Now you have in your hands several temperature scenarios and their related probabilities-consequences evaluations.

For each temperature scenario you can draft a direct/indirect consequence evaluation bearing on the appropriate risk dimensions.

Let’s start with a common practice approach, based on a matrix we “borrowed from the web” and we used in another blogpost showing that Arbitrary selections in Risk Management are a liability  (Indeed, not a recommended practice!).

Using that risk matrix the likelihood of 0.2 would be rated “probable” based on the indexes verbiage of that matrix. The likelihood associated with 0.3 is also rated “probable”. So “Historical” and “Climate Change” scenario are rated with an equal likelihood although their probability is different. This leads to a granularity problem we expressed here.

The consequence of 10m$ is considered minor in the same matrix and as a result the colour coding for the historical risk and the climate change are respectively green (acceptable) and brown (supplementary. NB: We do not like this description, but the author of the matrix used it. Likely this means it is neither Acceptable nor considered an issue). 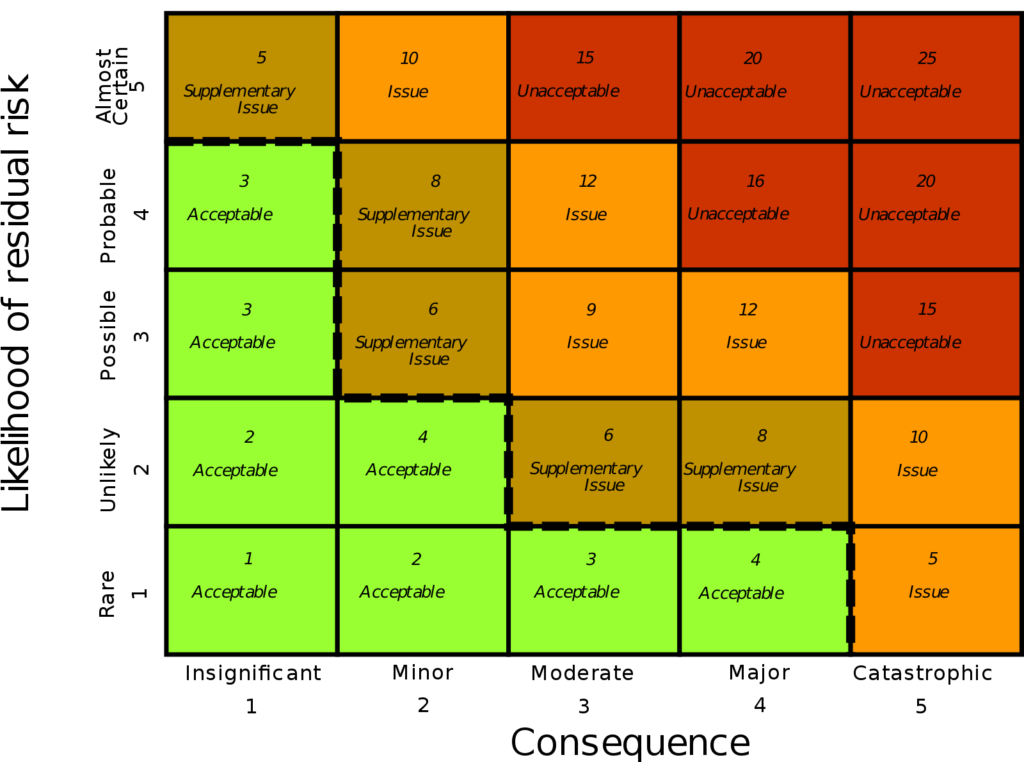 Now if we look further, the Climate change extreme Scenario has a consequence of 1,000M$ which is considered as “Major”. That is coupled to a maximum likelihood considered as “rare” (1% per year). Thus this risk scenario is considered acceptable (green) with this matrix prioritization, same as “business as usual”. Would you accept this result?

To conclude, let’s see what a quantitative approach tells us.

In the figure below we have the 3 scenarios plotted together with a tolerance curve. Note the tolerance curve was defined with the client, through facilitated Q/A sessions. Indeed, the curve “belongs” to the client, the operation, the project,. Thus it is not a general threshold. 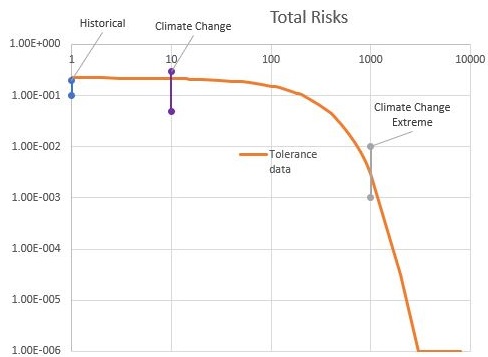 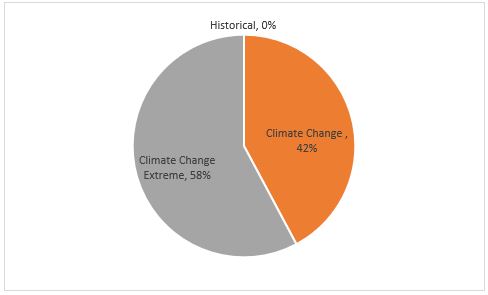 Climate change events and their uncertainties should not be an excuse to freeze (pun not intended!)  and to neglect a rational and well-balanced risk assessment.

Risks are difficult to grasp through intuition and gut-feeling. Because several orders of magnitude variations in two dimensions make it extremely hard to grasp intuitively the effects of what may occur.

Proper tools make it simple to derive the right conclusion. However, the steps in-between cannot be missed. Moreover, jumping to conclusions may be ruinous.