For risks such as driving, where fatalities can be counted on large samples, the number is likely to be reliable, at least in some countries. However, even if the risk comparison data are carefully and accurately reported, they can be misleading. Indeed, the risk calculation for driving does not differentiate different driving situations: for example, speeding home after a long party in the early morning is two orders of magnitude more dangerous than driving during the day.

This type of reasoning may explain why in our experience people have trouble relating such “general” risk comparisons tables to the specific risks posed by a project.

Useful risk comparison should be accurate and pertinent. For example, comparing a chemical processing plant risks to voluntary actions such as smoking or driving without a seat-belt is neither accurate nor pertinent.

Analysts attempting comparisons must stress that values are relative and not absolute. That is because we cannot know the future but can evaluate with the information we have at hand.

Relative risk evaluations and benchmarking are paramount as well as complete consequences analyses. Furthermore, comparison results can be completely biased if one poorly states the failure criteria.

Whereas risk comparison amounts to showing activities of comparable risks, benchmarking corresponds to rate of a given activity related to other similar activities.

That remains true even in the case of world-wide tailings dams portfolio performance. In that case, the rate of tailings dams major failures, 10-3 to 10-4 per year uses incomplete statistic, likely afflicted by under reporting and other biases, or necessarily simplified models and evaluation approaches. However, the range makes sense when compared to large hydro-dams performances.

Effects of mitigation and other actions and inaction

Benchmarking of a Tailings dams portfolio can assume the aspect shown in the figure below. The figure shows: 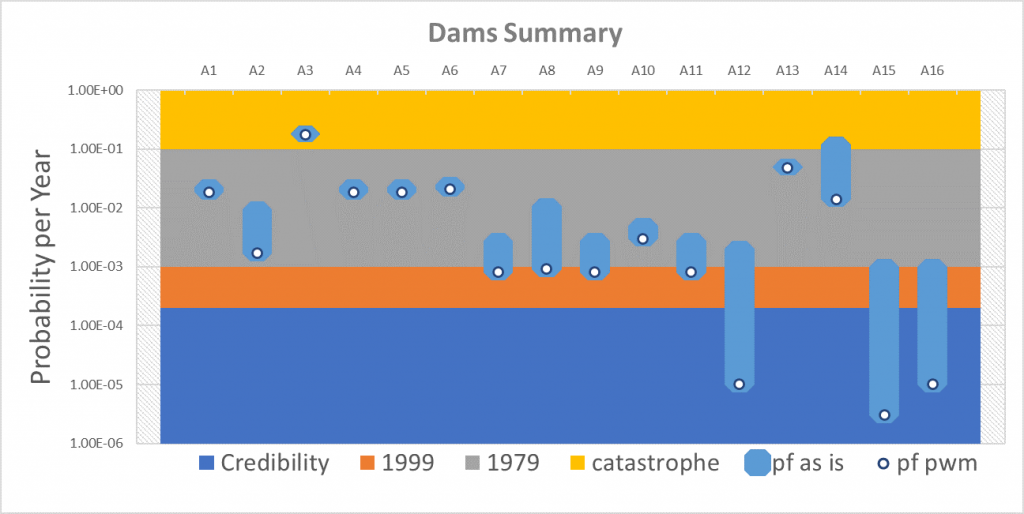 Mitigation implemented on dams and ancillary water management facilities will push the likelihood of failure down, towards the white circles.

The combination of the graph above with the cost of consequences for each dam gives the risks. Consequences may derive from performing dam break analyses or other simplified approaches.

Thus, bench-marking requires specific methodologies which are economical, sustainable and deliver significant competitive edge to their users . They are necessarily  more sophisticated than classic financial tools like NPV or the mere “counting of risks” in traditional matrix based risk assessments.

The understanding of which risks are operational, tactical and strategic is quintessential in this phase. That classification is an important result of a modern risk assessment, and not an arbitrary selection.

One response to “Tables of Risk comparisons”