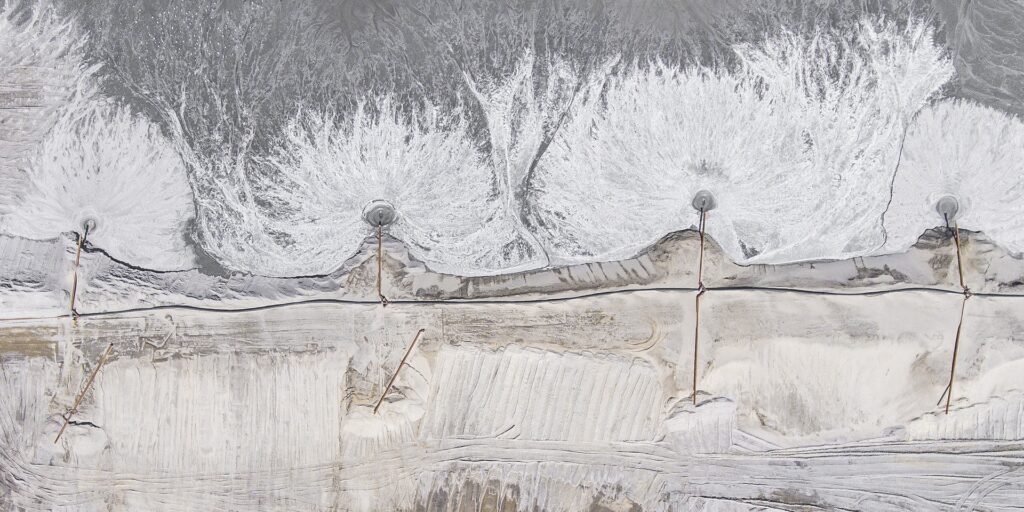 We recently published the notes we took while reading ICMM guidance and conformance protocols. In that text we stated that ORE2_Tailings™ anticipated the requirements of ICMM GISTM. Indeed, the threads of our publications, which culminated with Tailings Dam Management for the Twenty-First Century shows that evolution. Today we bring to your attention an example based on real life dams composing a fictitious tailings storage facility. We use it to show how ORE2_tailings™ supports the requirements of ICMM • Global Industry Standard on Tailings Management (2020).

Field of application of ORE2_Tailings™

A dam is not a mere cross section, but a system including a “homogeneous” segment of tailings retaining barrier (homogeneous cross section, foundation, topography and potential consequences) and its ancillary surface water management facilities (spillways, penstock, weirs, diversions, etc.), possible lines and “traffic” running at its crest.

ORE2_Tailings™ looks at catastrophic failures of the dam system generated by the failure of the dam itself and/or and its ancillary surface water management facilities, possible lines and “traffic” running at its crest. ORE2_Tailings™ looks at the causalities of such a failure, also including those potentially existing from inception of the design, construction. From the causalities it is possible to infer information related to the most significant failure modes (see GISTM Requirement 4.1).

ORE2_Tailings benchmarks the probability of failure of a dam with respect of the performance of the world-portfolio, based on over 100 years of records. It therefore supports conformance with Requirement 4.7 (reduction of probability).

A ORE2_Tailings™ application to a dam

ORE2_Tailings™ deployments start with the collection of all existing documentation of the dam and an evaluation of the completeness of the archival information. Riskope has developed a specific discovery system to rationalize and speed up this phase (see ICMM/GISTM Principle 2).

Various causalities aggregations are proposed to the user. The first one considers the following families of causalities for the dam body (ancillary water management intervenes in the probability of failure).

NB: The values of the aggregated causalities (average) shown below apply specifically to the selected example.

The second aggregation splits the design family into three categories as shown below.

NB: The values of the aggregated causalities (average) shown below apply specifically to the selected example. 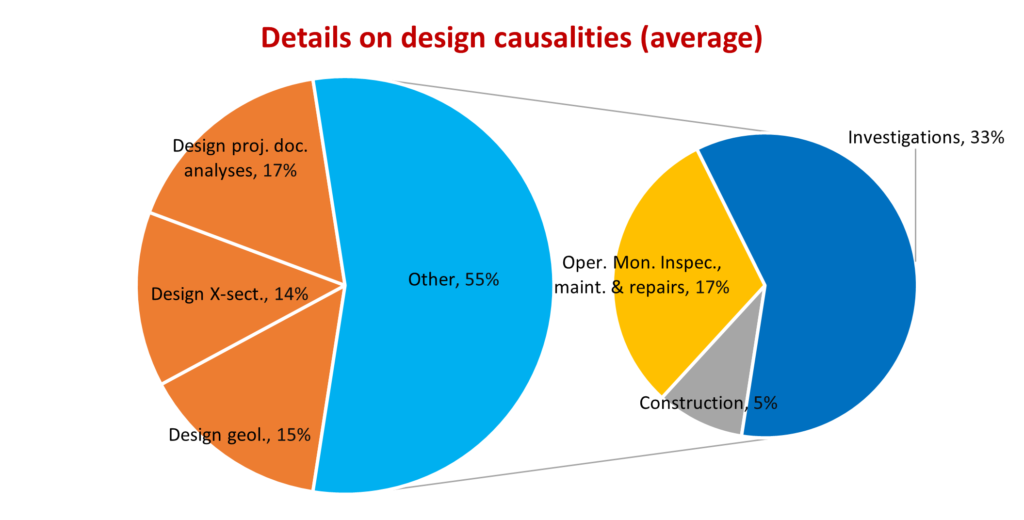 These results support Principle 5 and in particular Requirement 5.4 and 6.5, if used to support change management.

The next point delivered by ORE2_Tailings™ are the probabilities of collapse of the system.

ORE2_Tailings™ provides the estimated values of the annualized probabilities of failure for the conditions the engineers have evaluated for the dam and combines them with the probabilities that the ancillary surface water management fails. Over thirty KPIs are included in the evaluation covering the numerous causalities related to a potential failure (including deformations, potential for piping and internal erosion, etc.). Thus ORE2_Tailings™ with its “what if” capabilities foster the development of an organizational culture, personnel education and awareness, following the important Principle 11.

Generally it is expected the engineers would have evaluated the dam for:

If anyone of these is unduly missing (non-credible based on the present materials), then it would already been flagged-out during the completeness of documentation phase and the ORE2_Tailings™ supported conformance to the appropriate requirements of Principle 3, 4.

As engineers likely evaluated the conditions above under various assumptions, ORE2_Tailings™ delivers ranges of the probabilities for the system “as is”. The graph below shows these values as horizontal traits with min/max range. Min-max range can be very wide if significant uncertainties are present. The graph also shows a blue descending arrow indicating the potential effect of bettering the surface water management systems. This offers an immediate “what-if” scenario many users consider important. Indeed, a scenario where the probability of surface water management to fail would be by far inferior to the probability of failure of the dam itself helps evaluate the robustness of the system facing (climate change) extreme events. The probability of failure of the water management systems is located at the right end, in its “as is” status, i.e. the blue horizontal segment.

Three benchmarks are present on the graph:

Overall, ORE2_Tailings allows to combine this information with the causality analysis to inform the most likely failure modes or combinations whereof. 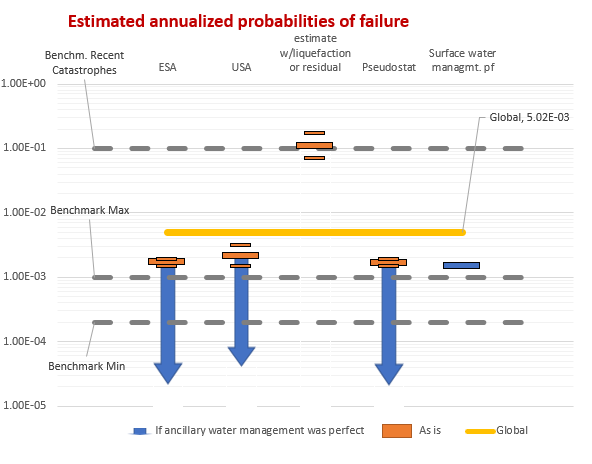 For instance, the global system annualized is evaluated in the example at pf=5.02E-03, i.e. a value higher than the benchmark max. The annualized probability of ancillary water management facilities failure included in the above estimates is 1.45E-03. As one can immediately notice, three cases are strongly influenced by the probability of failure of the ancillary water management. Mitigation focusing on enhancing the ancillary water management facilities could easily bring all those cases to the benchmarks or better than the benchmarks. However, the global probability of failure is strongly influenced by the liquefaction/residual conditions and at the end of the day the engineer should simulate various mitigative scenarios to search for the most convenient approach.

Notes on seismic and static liquefaction/residual

ORE2_Tailings™ accepts various sets of return-accelerations. That is because we noticed over the years that the influence of minor quakes on the annualized probability of failure should not be neglected (section 11.2.3, page 164 of Tailings Dam Management for the Twenty-First Century. Those quakes have a smaller acceleration but are more frequent than MCE, for example.

Another peculiarity of ORE2_Tailings™ is the consideration for the potential triggers of liquefaction/residual events. ORE2_Tailings™ considers eight of these for which the engineer and owner have to estimate potential “frequencies” (see our book, Section 9.3, page 136). For instance one of these is “access of heavy equipment working on dam”. The engineer could likely state, for example, “once a year” or perhaps “every two years”. ORE2_Tailings™ then evaluates the composite probability of the triggering event. Of course, this evaluation must pair with strict SoPs the owner should publish and enforce on the system, in order to avoid catastrophic blunders during service life and after closure. This is part of Requirement 5.2.

ORE2_Tailings™ can accommodate a consequence scale the client would have established based on a code, such as the ICMM • Global Industry Standard on Tailings Management (2020). However as discussed in our last comments on ICMM documents  we consider these oversimplified consequences scales with caution. The main reason is that they are focusing the attention on one dimension of the potential consequences. This is an aspect we have criticized for years and that has other researchers recently confirmed. This particular aspect can not only deliver poorly prioritized portfolios, but is near to useless for a company or a government wanting to use risk assessments for risk-informed decision-making.

We hope this example has given a clear view of the capabilities of ORE2_Tailings™ for a single dam system. In particular we hope it shows where and how ORE2_Tailings supports ICMM global industry standard on tailings management conformance for a single system. Beside all the points above ORE2_Tailings™ is also an instrument of conformance to Principle 10 and 15. That is because it fosters better, repeatable and reality anchored communication.