We now focus on one dam and show how ORE2_Tailings™ supports rational and sensible risk mitigation decision-making as requested by GISTM.

The dam we selected for this example is inactive and is parallel to a valley bottom. An unprotected creek runs at its toe and the bed is considered to be sufficient for the 1/500 return. Beyond that flood, there will be progressive erosion of the dam toe.

The dam is upstream with diversions, drainage systems capable of carrying the 1/100 return. The area is not seismic and there is consensus the material is draining and not liquefiable.

The spillway was reportedly designed for 1/500, but its present conditions do not allow to pass more than the 1/100 return flood.

Due to past instabilities the dam was reinforced after a good geotechnical investigation, documentation, etc. Nevertheless the nature of the structure itself and its ancillary water management systems deliver a annualized system pf of 1.07E-02 (appx. 1.1%) which places it well out of the world-wide benchmark.

Estimated failure consequences C are of appx. 2B$ due to the presence of people, housing, infrastructure, river, and a relatively pristine environment downstream.

The owner and dam’s EoR request

Given the probability of failure and cost of consequences the dam is corporately intolerable as we saw in a previous post. The owner and the EoR want to mitigate its risks. They asked us to deploy ORE2_Tailings™ to enable them to perform what-if scenarios. This supports them for the tailings dam mitigation risk informed decision making.

The EoR has developed a number of possible mitigative actions as follows:

ORE2_Tailings™ evaluated each one of the alternatives, including the initial status as shown in the figure below.

As one can see, it is extremely difficult to bring such a dam within or to better values than the world-wide benchmark. The reason is simple: birth defects and nature of the materials.

As stated above, the dam will remain a strategic risk even in case of the most comprehensive mitigation implementation. The only way to make it nonstrategic would be to alter the system, i.e., for example alter the consequences of its failure. And of course, talking about consequences, at this point it is possible to express the risk and the associated mitigative costs, as estimated by the EoR for each alternative.

See the graph below for the results.

It becomes immediately clear that in this specific example the GISTM ALARP is encountered with a mitigation level between Alternatives 1 and 2.

As a side note, the crossing point corresponds to the “legal test for negligence” adopted in some jurisdictions (Oboni, F. and Oboni, C.H., 2021. Convergent Leadership-Divergent Exposures, Springer, Cham.). That is that a company is not negligent if the mitigation expenses match at least the risk generated by the considered facility. Following the “legal test for negligence” the negligence of the injurer (company) is determined by relations between the:

That means the injurer is only negligent if M is less that the product of p and C :

In other words, a judge may deem a company negligent only if mitigative moneys M spent (CAPEX or per annum) are less than the annualized risks. The legal negligence test is not a critical test for an operation when confronted to risk perception and public reactions.

As a result, the discussion boils down to one question.

Is selecting a mitigation level between Alternative 1 and 2 enough?

Indeed, some stakeholder could easily claim that the owner should go to Alternative 3 or 4 or higher.

However, going higher than Alternative 2 requires a sharp investment increase for what seems a modest risk mitigation increase. In this example, the mitigation costs follow an “exponential” increase while the risk per year reduction follows a “linear” decrease.

As the paramount importance and benefits of building the knowledge base have been shown by ORE2_Tailings™, it is now time to focus on the mitigations in order to answer the question above. 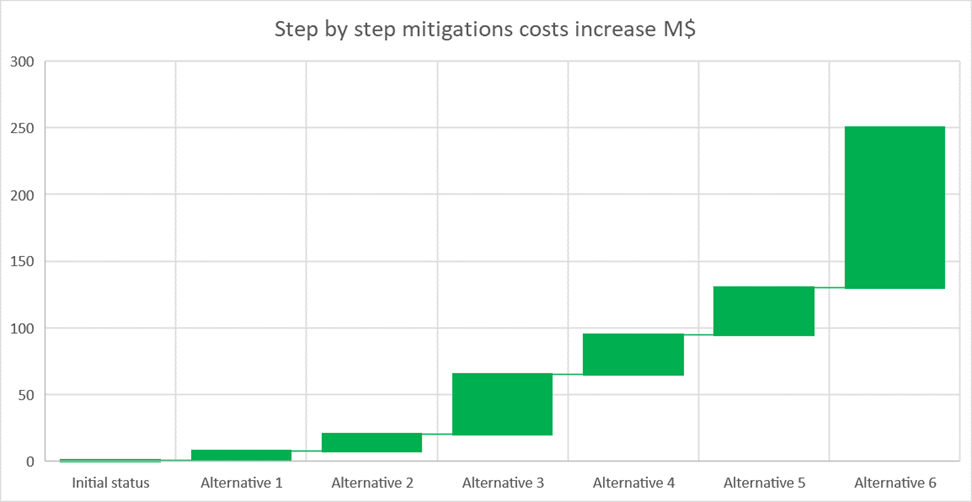 Indeed, we can see a sharp increase of mitigative costs at Alternative 3 and Alternative 6.

We display below the ratio between the annualized risk decrease (M$/yr) and the mitigative CAPEX (M$) at each mitigation Alternative. The graph shows the prioritization of efficiency of mitigations e.g. that alternative 2 give the most efficient decrease of risks per mitigation invested, while alternative 3 and 6 the worst. 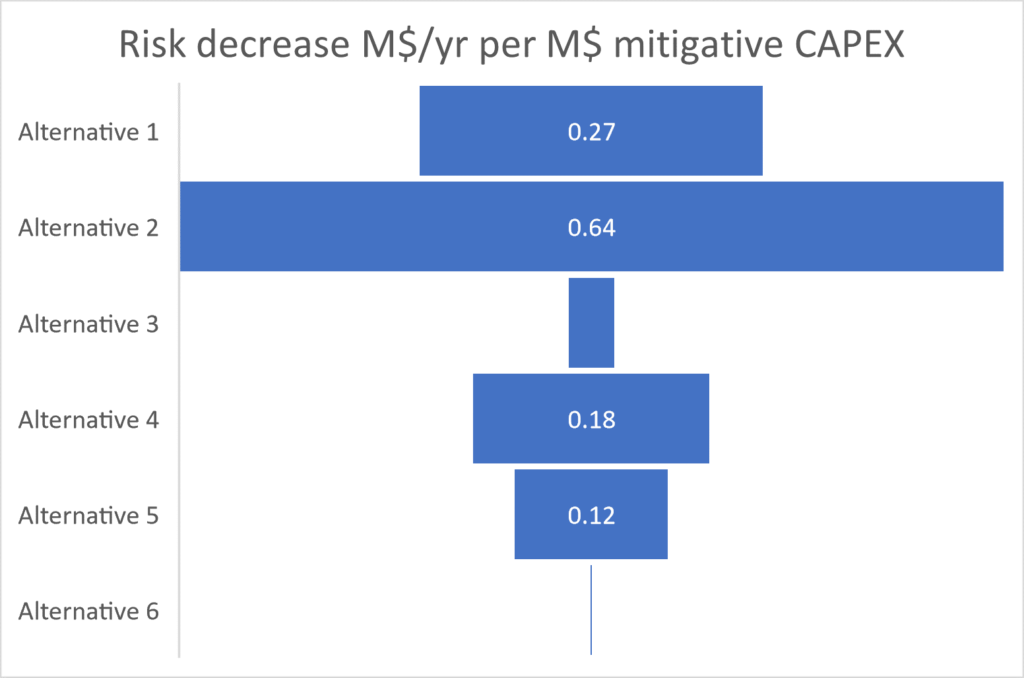 The owner and the EoR could easily argue at this point that any mitigation beyond Alternative 2 would be too inefficient. Of course, that is a valid argument  if there are no specific regulatory issues to be complied with.

Thus ORE2_Tailings™ deployment would offer a solid ground of discussion and negotiation (with the public and regulators, and if applicable with insurers) to state that Alternative 3 or more  represents a possible choice for risk mitigation level.

We showed that one can use ORE2_Tailings™ in full conformance with GISTM to foster healthy and rational discussions between the owner, the EoR and regulators.

The deployment can give indications useful to optimize, if feasible from a constructional point of view, the phasing of the various mitigation alternatives. It can foster heathy and rational technical and risk perception discussion on the:

The first step in any mitigation approach will always be to build a solid knowledge base on the considered system. Building the knowledge base will reduce uncertainties and hence allow to approach the “base case”, i.e. the case before mitigation, with more confidence.