We split this Chapter in two sections: 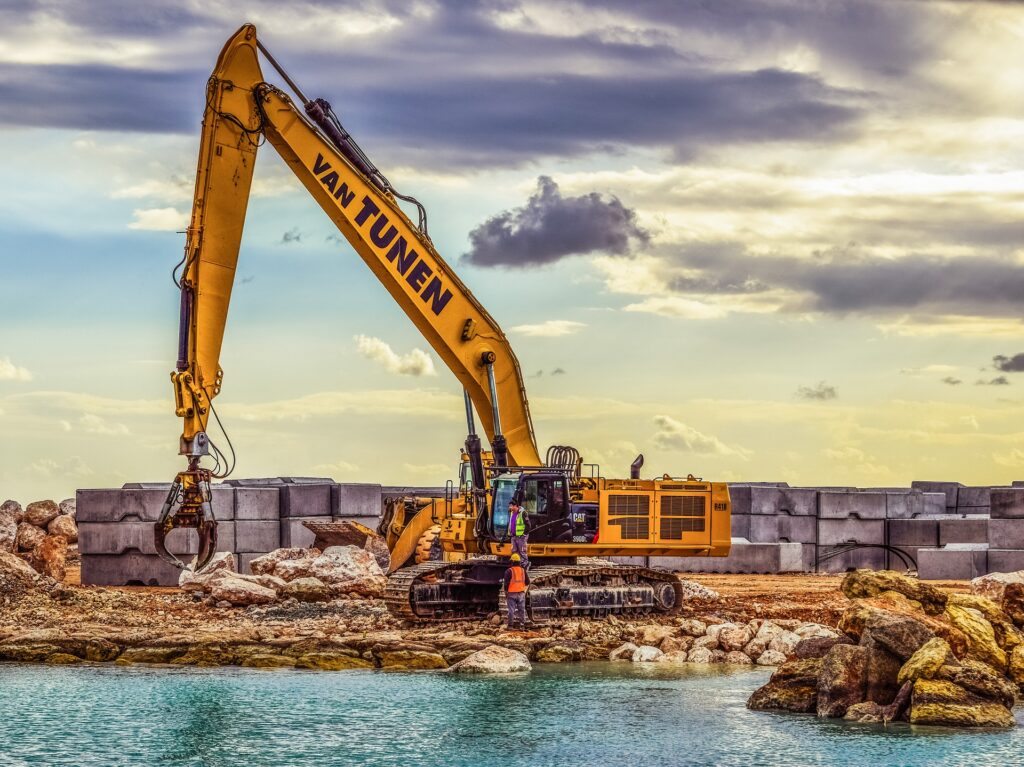 10.1  Actions to increase the knowledge level and “simple” mitigations.

Take away #9 risk informed recommendations for each site/dam may be, are represented at the beginning by a series of knowledge-based enhancement actions and/or “simple” procedural mitigations.

In this section we show how ORE2_Tailings™ supports rational and sensible risk mitigation decision-making compliant with GISTM.

In a recent communication we showed a full example of this. We included related  graphs and numerical results.

For example, the figure below shows the system pf cumulated decrease as a function of the mitigation stage. Note the minimal estimated advantage in pursuing mitigation beyond a certain stage. We will discuss this decision support item  later. Of course  jurisdictional compliance may force to diverge from the “optimum” path to mitigation. 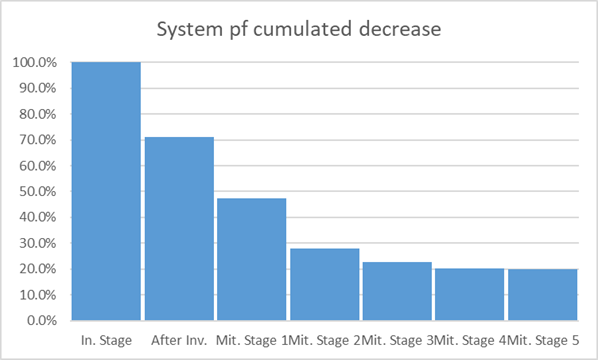 As stated earlier, if one deploys ORE2_Tailings™ in parallel with the engineering studies the methodology can support risk-informed decision-making. In this case the selection of mitigative alternatives and the return optimization.

Once one includes the risks together with the costs of each foreseen mitigative step one starts a true cost benefit analysis. 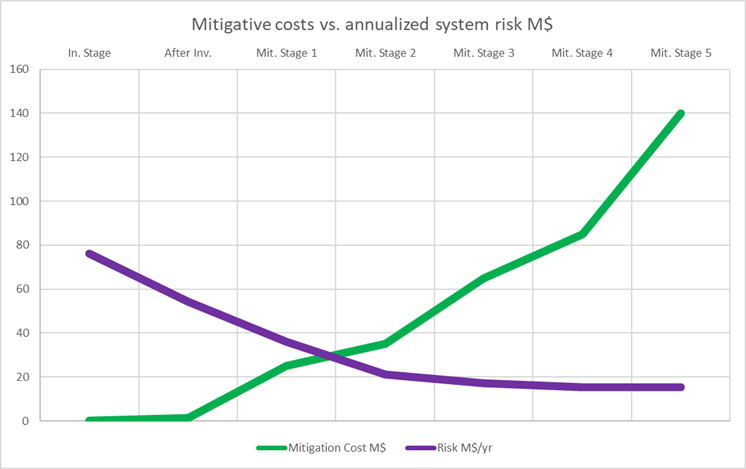 In this specific example the GISTM ALARP lies at a mitigation level between stage 1 and 2. Thus one would select Stage 2  out of prudence. That is if there were no jurisdictional compliance issues (e.g. seismic compliance) and no public perception considerations.

As a side note, the crossing point corresponds to what some jurisdictions adopt as the “legal test for negligence”. That is that a company is not negligent if the mitigation expenses match at least the risk the considered facility generates.

Following the “legal test for negligence” one determines the negligence of the injurer (company) by relations between the probability of injurious event (p), the consequences of the resulting injury (C), and the burden, or cost, of adequate precautions or mitigations (M):

Negligence may occur if M < p*C.

In other words, a judge may deem a company negligent only if mitigative moneys M (CAPEX or per annum) are less than the annualized risks. The legal negligence test is not a critical test for an operation when confronted to risk perception and public reactions.

As a result, the discussion boils down to the following: is selecting Mitigation level 2 from a pure risk-engineering point of view enough if we do not consider jurisdictional issues?

The perception of some stakeholder could easily claim that the owner should mitigate “anyways” to Alternative 3 or 4 or higher.

Going beyond Alternative 2 requires, using the costs we have assumed for this example, a sharp investment increase for what seems a modest risk mitigation benefit. In this example, the mitigation costs follow a steeper than linear increase across the mitigative stages (Figure below). NB: In some cases this reasoning could bring to propose different sequences (as possible and feasible) of the stages to seek better CAPEX allotment.

Indeed, we can see in the figure above that stage 1, 3 and 5 represent the biggest “steps” in the CAPEX development.

It is now time to focus on the mitigations in order to answer the question above.

The next figure displays the ratio between the annualized risk decrease (M$/yr) and the mitigative CAPEX (M$) at each mitigation stage. 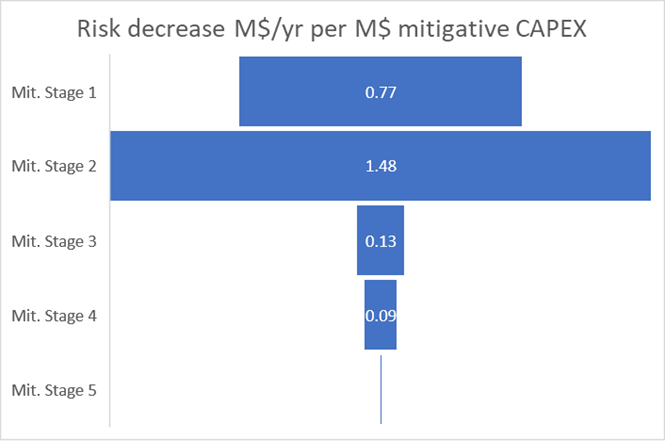 One can see the ratio  as an efficiency evaluation of each mitigative stage. The figure shows that after Stage 2 the efficiency strongly decreases.

The owner and the EoR could easily argue at this point that if there are no specific regulatory compliance issues, any mitigation beyond Stage 3 would be too inefficient. This also corresponds to the reaching of the horizontal asymptote of the system pf. Indeed, as stated above, if Stage 2 complies with the GISTM ALARP criteria and the legal negligence test, it is also true that the system reaches horizontal asymptote of  pf  at Stage 3.

Thus ORE2_Tailings™ deployment will offer a solid ground of discussion and negotiation. This will simultaneously address the public and regulators, and, if applicable, the insurers. The statement will say that Stage 3 represents a valid possible choice for risk mitigation level.

Ultimately this deployment example, using assumed initial knowledge and mitigation costs, shows that one can use ORE2_Tailings™ in full conformance with GISTM. The goal is to foster healthy and rational discussions between the owner, the EoR and regulators as well as other stakeholders.

The deployment can give useful indications to select and optimize the phasing of the various Mitigation stages. It can foster heathy and rational technical and risk perception discussion. In particular on the level of desirable risk mitigation, based on GIST ALARP concept, the legal negligence test and finally the mitigative stages “efficiency”.

The first step in any mitigation approach will always be to build a solid knowledge base on the considered system. Building the knowledge base will reduce uncertainties. Hence it will allow to approach the “base case”, i.e. the case before mitigation, with more confidence.