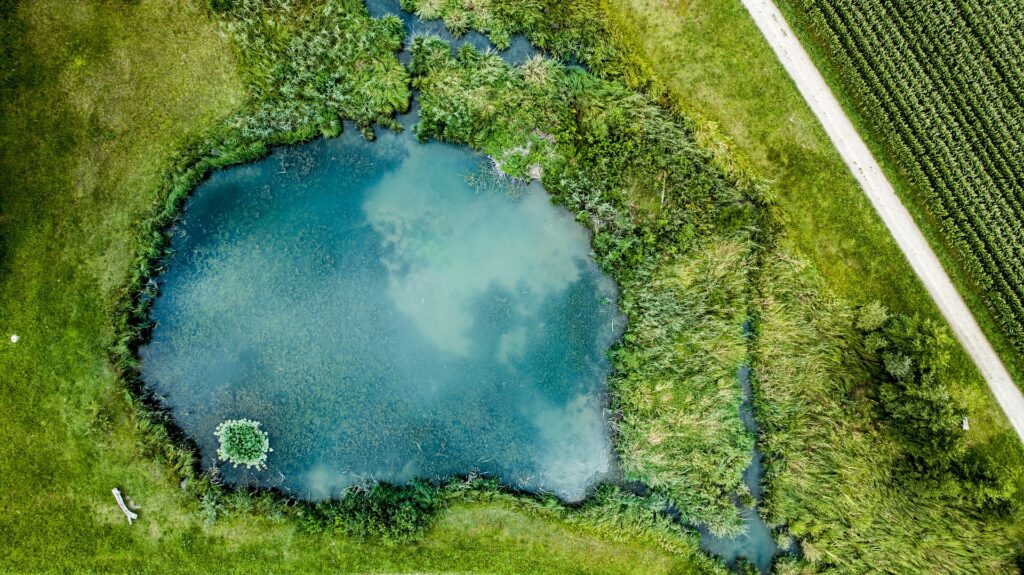 This blogpost shows how Risk Informed Decision Making (RIDM) using ORE2_Tailings™ supports rational and sensible risk mitigation selection. This is a requirement of the Global Industry Standard on Tailings Management (GISTM). We use an anonymized case report to preserve confidentiality.

To support rational risk mitigation roadmaps, first we test each possible single mitigative alternative and chain of possible mitigation steps in comparison to the world-wide benchmark failures rate. Then we split each alternative’s causality between Dam vs. Ancillary water system, including possible necessary creek protection. The goal is to understand where we can apply optimum actions. This helps understanding where the mitigation sweet spot is and to evaluate the ratio between the annualized risk decrease and the mitigative CAPEX for each mitigation alternative.

Furthermore, for each mitigation alternative and stage, we can evaluate the risk abatement “efficiency”. At the end one can select the “optimal” roadmap considering constructional and regulatory constraints. The RIDM roadmap leads to select a defensible mitigation level (GISTM ALARP or better). RIDM fosters healthy and rational technical and risk perception discussion related to the desired level of risk mitigation, based on GISTM ALARP. One can use RIDM to foster healthy discussions with regulators and insurers as applicable and needed.

The dam we use as an example is inactive and parallel to a valley bottom. An unprotected creek runs at its toe and the engineers cosidered its bed to offer sufficient protection against the 1/500 event. Beyond that flood, there will of course be progressive erosion of the dam toe. The dam has an upstream construction method. It has diversion ditches, drainage systems capable of carrying the 1/100 return. The area is not seismic and there is consensus the material is draining and not liquefiable. The engineers designed the spillway for 1/500. However, its present conditions do not allow to pass more than the 1/100 return flood. Due to past instabilities the engineers reinforced the dam after geotechnical investigation, documentation, etc.

Nevertheless, the estimated annualized system probability of failure (pf) of 1.07*10-2 (appx. 1.1%) per year places the dam well higher than the world-wide benchmark highest value. In other words, the dam is more hazardous than the world-wide benchmark. Estimated failure consequences C are evaluated at appx. 2B$ due to the presence of inhabitants, housing, infrastructure, river, and a relatively pristine environment downstream.

The owner and dam’s EoR request

Given the pf and C the dam risk is corporately and societally intolerable. In addition it falls in the “Extreme” consequences following GISTM. The dam also represents a corporate strategic risk following the tolerance threshold comparison. Thus owner and the EoR want to mitigate its risks and we had to produce what-if mitigation scenarios to support risk informed decision-making.

The EoR developed a number of possible mitigative stages increasing from minimal repairs to significant reinforcement of the overall system. In total the EoR prepared six Alternatives. Their details are omitted due to space limitation. The process consisted in systematically evaluating the risks for each mitigative stage, the related CAPEX and deriving risk abatement-mitigative investment graphs to determine the ALARP “point”.

Figure 1 displays each alternative’s causality split between the Dam vs. Ancillary water system including the creek. These jointly cause the annualized System pf. The graph also shows that the ancillary water management facilities and the creek remain the preponderant failure causality for alternative 1 to 4. Instead, the dam’s pf would drive alternative 5 and 6 .

Figure 2 (left) shows the system pf cumulated decrease as a function of the mitigation alternative/stage. Note the minimal estimated advantage in pursuing mitigation beyond a certain stage, unless it is mandatory for jurisdictional compliance. Remember, Figure 2 (left) shows the changes in terms of relative pf, and not in terms of risk. Once we include the risks and the costs of each foreseen mitigative step, we can activate a true cost benefit analysis (Figure 2 (right)).

The crossing of the two curves, i.e. risk and mitigation cost vs. mitigation level, represents the “theoretical optimum”. The GISTM conformance documents (Figure 9 in that document) indicates that point as the ALARP point. However, we would rather call it the lower bound of the ALARP range. In this specific example the GISTM ALARP appears with a mitigation level between stage 1 and 2, so one would select mitigation stage 2 out of prudence. Jurisdictional compliance issues (e.g. seismic compliance) to be respected and public perception considerations may alter that selection, though. 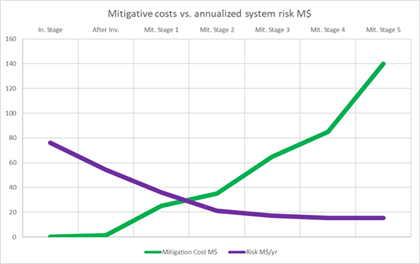 The discussion boils down to: “is selecting mitigation stage 2 enough from a pure risk-engineering point of view, if we do not consider jurisdictional issues?” The perception of some stakeholder could easily be that the dam risks should be mitigated “anyways” to stage 3 or 4 or higher despite the high CAPEX of stages 1, 3 and 5 (Figure 3 (left)). In this example, the mitigation costs follow a steeper than linear evolution across the mitigative stages (Figure 3 left).

Figure 3 (right) shows that after stage 2 the mitigation efficiency strongly decreases. The owner and the EoR could easily argue at this point that if there are no specific regulatory issues to be complied with, any mitigation beyond stage 3 would be too inefficient. That also corresponds to the reaching of the horizontal asymptote of the system pf (Figure 2). Indeed, as stated above, if stage 2 complies with the GISTM minimum ALARP criteria, it is also true that the horizontal asymptote of the system pf is only reached at stage 3.

Thus our deployment would offer a solid ground of discussion and negotiation (with the public and regulators, and, if applicable, with insurers). Indeed one could state that stage 3 represents a possible choice for risk mitigation level. However, going beyond stage 2 requires, based on the costs we have assumed for this example, a sharp investment increase for what seems a modest risk mitigation gain. Note, in some cases this reasoning could bring to propose different sequences (as possible and feasible) of the stages to seek better CAPEX allotment.

Ultimately this deployment example, using assumed initial knowledge and mitigation costs, shows that our quantitative approach can be used in full conformance with GISTM to foster healthy and rational discussions between the stakeholders. The deployment can give useful indications to select and optimize, if feasible from a constructional point of view, the phasing of the various mitigation stages. It can foster healthy technical and perception-based discussion on the level of risk mitigation that should be attained, based on:

The first stage in any mitigation approach will always be to build a solid knowledge base on the considered system. Building the knowledge base will reduce uncertainties and hence allows to approach the “base case” with more confidence. 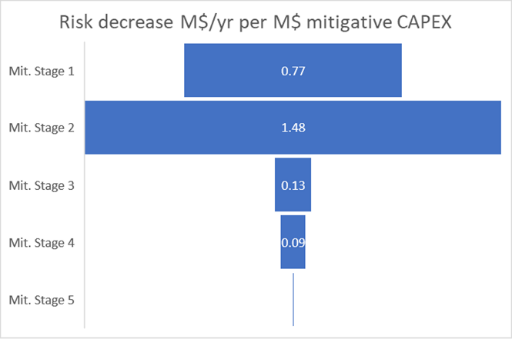 We showed that one can use our ORE2_Tailings™ approach in full conformance with GISTM. The process gives RIDM indications to optimize, if feasible from a constructional point of view, the phasing of the various mitigation stages and alternatives. It can foster healthy and rational internal and external communication on the: