A Case Study on ALARP Optimization

A Case Study on ALARP Optimization

A Case Study on ALARP Optimization is the title our paper at Tailings 2022.

The combination of probability of failure and consequences generates the potential risks of dams and other structures. Designers and owners should design, mitigate and monitor throughout the life and toward closure of dams. The GISTM indicates an ALARP objective for mitigation.

In the paper we use an anonymized case to show how a dam’s probability of failure and risks evolve with its raising. In a second step we explicitly discuss the search for the ALARP risk mitigation level for a specific dam elevation.

At the moment of the first evaluation the case story dam had reached a certain crest elevation and the planning included several more raises. Thus, the assessment we ran was part backward looking and part predictive.

To support the ALARP mitigation roadmaps, we systematically tested future mitigations, dam raise, and monitoring effects. Simultaneously we  compared the results to the world-wide failures rate benchmark (Oboni, Oboni, 2013). This helped understanding where the mitigation sweet spot was at any given stage, and where the dam stood compared to other structures, testing, monitoring, and other human factors.

The causality of the potential failures at each stage, a conceptual broadening of the usual “failure-modes” reasoning (how the dam fails) to the “causes” (why the dam fails) proved to be an extremely valuable criterion.

At the end of the day the owner and his EoR had a clear understanding of how their past decisions had influenced the evolution of the probability of failure of the considered dam system. Furthermore they had clear decision-making support for the future stages.

We believe tailings dams quantitative risk assessments should rely on proper evaluation of consequences and pf. That is especially if the goal is to enable economical and swift prioritization of a portfolio of dams. Prioritization enables risk informed decision making for portfolio mitigation.

Also, the concept of assessing benefit of mitigation effort, residual risks, ALARP are closely linked. Indeed, GISTM Requirement 4.7 states the need for risk informed decision making for existing structures and ALARP mitigation. We consider that showing the ALARP value as a range with the theoretical at its minimum helps conveying the idea that tailings systems are complex, surrounded by uncertainties and covers stakeholders’ anxiety. Furthermore we consider the ICMM guidance figure 9 (reproduced below) is misleading. That is especially trues since such a graph cannot be built using “qualitative categories” of risk and resources. 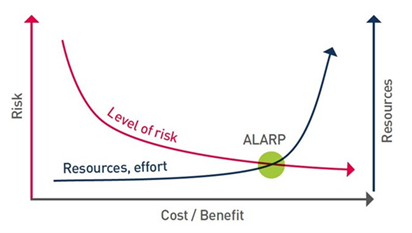 Are quantitative approaches compliant with GISTM?

Fortunately, ICMM considers quantitative approaches as one of the two possible alternative families to perform risk assessments. However, the other alternative, i.e. a semi-quantitative FMEAs do not offer the same level of resolution, repeatability and transparency. Furthermore, especially for owners of large portfolios, semi-quantitative FMEA would lead to paralysis by analysis. Paralysis by analysis results in excessive costs and deters users from regular updates. ORE2_Tailings™ is compatible with preliminary evaluations. Several case studies proved and tested it with respect to standard approaches. It is thus possible to prioritize any portfolio economically and swiftly in terms of probability of failure (pf).

One achieves reliability when the pf is lower than a certain level and risks are tolerable or ALARP. Thus it is necessary to clearly state what is considered a successful structure. Indeed, unless one clearly defines success, failure remains an ambiguous term . Our study considered the dam successful if:

What is the probability of failure?

The nemesis of success is failure, expressed as the probability of failure pf. Failure can occur because of hazards, threats and conditions that are the causes of the failure. As risk assessors we focus on the causes of failure, i.e. the why? Whereas a designer would normally focus on the modes of failure (Failure Modes). Failure Modes describe how a failure occurs. This point was brilliantly made by Terry Eldrige (Golder) during his Keynote Lecture at TMW2019. By knowing how a failure occurs,  the designer can develop countermeasures. By exploring the causality (why?) together with the risks, we can guide decisions on where and how to mitigate dam risks.

Benchmarking of probabilities of failure

The figure below displays the pf yielded by ORE2_Tailings™ together with the world-wide benchmark for catastrophic failures. Benchmarking of tailings dams exist since at least 2013. Hazard benchmarking looks at the pf, disregarding the consequences. Hence it significantly differs from a full pledged risk prioritization by using the quantitative estimate of the consequences.

Benchmarking uses a “statistical” approach as well as a theoretical range developed by Taguchi.

Reading the probability of failure graph

The system values (larger orange rectangles in the figure) are those attained by the dam combined with its ancillary water management systems. The dam-only pf (readable at the bottom of the blue arrows) is the value of the dam body alone. This corresponds to a situation where the ancillary water systems have a pf significantly smaller than the dam body itself. The smaller orange rectangles correspond to the max-min estimates of pf at a specific crest elevation. The combined effect of ESA, USA and seismic conditions leads the dam to hover above the World Benchmark max level, which is not a desirable condition for a dam of this magnitude and extreme potential consequences.

Following the mantra that one cannot manage what one cannot measure, most industries and the EPA have extensively used the value of statistical life. Equally, many industries around the world have quantified environmental and reputation damages for at least 15 years.

As cited earlier, the mining company had already at hand a GISTM consequence evaluation. The dam belonged to the “extreme” category as many around the world. Unfortunately, such a verbiage does not allow to evaluate annualized risks. Likewise it does not allow to perform sensible prioritization, or ALARP definition, within a portfolio or a single dam stage. The annualized risk is the combination of the annual pf and the quantitative consequences. That is why we had to evaluate consequences following the multidimensional analysis built in ORE2Tailings™.

Indeed, the dam failure consequences dimensions we  include in ORE2_Tailings(tm) are the addition of:

Selecting the worst dimension does not even come close to the evaluating the full spectrum of consequences of a dam failure.

Thanks to the quantitative evaluation of annualized pf and the consequences we modelled the  evolution of the dam’s annualized risk as a function of the raises. The risk increased significantly from the beginning of the operation but remained relatively stable at 34-39M$/yr during the final stages of construction/raises. This helped the owner and his EoR to gain a clear understanding of how their past decisions had influenced the evolution of the considered dam system and offered clear decision-making support for the future stages.

The graph below shows the ALARP (lower bound) evaluation for crest elevation 380 based on the simulation of six mitigative stages on top of the present conditions (status quo). We drove the simulation all the way to a pf of 10-6 (Stage 6). That is down to the credibility threshold. Please note how the mitigation costs, delivered by the EoR, evolve almost exponentially, whereas the risk abatement features an asymptotic behavior towards negligible risks.

Based on this chart, risk perception and other considerations, one can determine the “optimum” ALARP point. It is most certainly located to the right of the theoretical crossing. As the mitigations are discrete steps, out of prudence one would be inclined to suggest Stage 2 is indeed the minimum ALARP.

A tough question within A Case Study on ALARP Optimization

However, the question is: from a risk-engineering point of view is it enough to select mitigation Stage 2 if we disregard jurisdictional issues?

Indeed, the perception of some stakeholder could be that the owner should mitigate “anyways” to alternative 3 or 4 or higher. However, going beyond stage 2 requires, in this example, sharp investment increases for what seems a modest risk mitigation gain. In some cases this reasoning could bring to propose different sequences (as possible and feasible) of the mitigation stages to seek better CAPEX allotment. Thus our ORE2_Tailings™ deployment would offer a solid ground of discussion and negotiation with the public and regulators, and, if applicable, with insurers. As a result, one could argue that stage 3 represents a possible “above minimum” ALARP choice for risk mitigation level. Ultimately this deployment example shows that one can use ORE2_Tailings™ in full conformance with GISTM. As a result we foster healthy and rational discussions between the owner, the EoR and regulators as well as other stakeholders.

Closing remarks on A Case Study on ALARP Optimization