A colleague sent us a paper by Rana, Ghahramani, Evans, Small, Skermer, McDougall and Take.  We reference it herein as Rana’s 2022 paper. The title is “Global magnitude-frequency statistics of the failures and impacts of large water-retention dams and mine tailings impoundments”. It is available online since Aug. 3rd 2022 at Earth-Science Reviews (2022), . 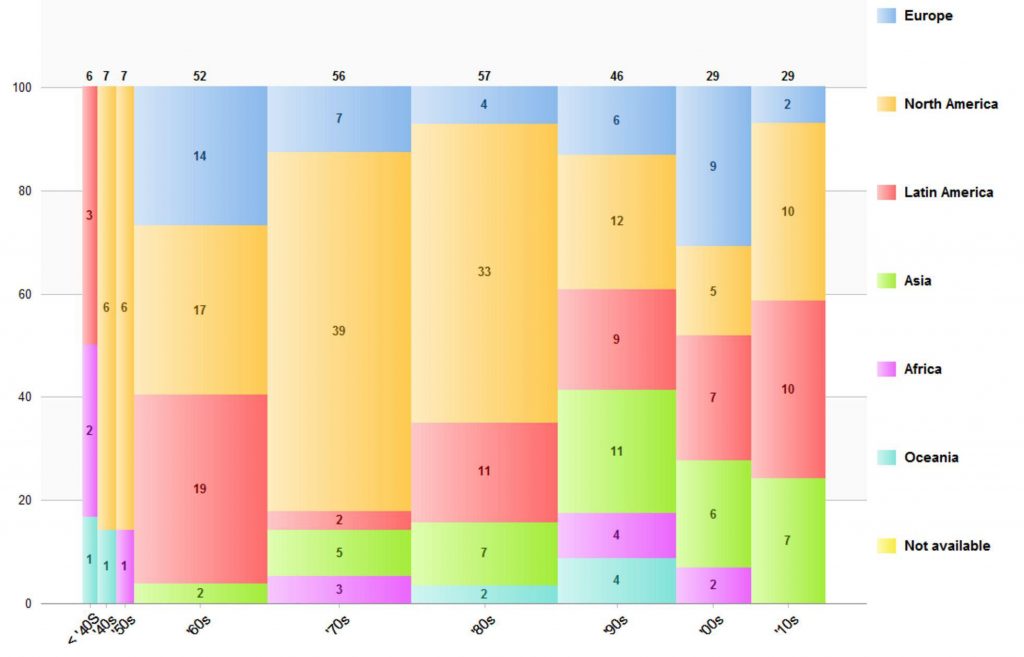 I must confess at first I was quite intimidated. Almost a decade earlier we had written Factual and Foreseeable Reliability of Tailings Dams and Nuclear Reactors -a Societal Acceptability Perspective, TMW 2013. We had produced a first estimate of the rate of occurrence of major catastrophic tailings dams failures in the world. Thus, it was with a mix of anxiety and trepidation that I undertook the reading of the paper by such a group of experts and academics.

In our discussion we will focus on TSFs only, due to our specific experience in this matter. We will reference herein our paper as Oboni’s 2013. Let’s note right away that the uncertainties are very significant even with basic data such as the number of tailings dams. Indeed Rana’s 2022 paper indicates a low estimate of constructed TSFs at 6,810, respectively a upper estimate of 20,230.

Let’s start with a couple definitions

Rana’s 2022 clearly defines the glossary it uses. We note the following definitions:

In Riskope practice we prefer the scientific notation to the percentage as it better covers the hopefully small numbers depicting the probability of failure.

Following Davies & Martin (M. P. Davies, T.E. Martin, 2000; N. Lemphers, 2010) there were more than 3,500 TDs (of various kinds and construction type, with at least 50% of the upstream design) around the world. In absence of more accurate data, and more particularly, on the evolution of this number, Oboni’s 2013 considered a portfolio of 3,500 dams globally and 1,000 dams for the US alone. Portfolios were assumed constant over the years. However, we noted that even if that assumption was wrong by one order of magnitude, there would be no significant alterations in the conclusions of the paper.

First of all let’s note that Rana’s 2022 state that the global rate of reported TSF failures has remained fairly constant since the mid sixties. Indeed, the annual number of TSF failures worldwide mostly ranges between 2 and 6, closely matching the Oboni’s 2013 estimates (appx. 1 and 7).

So, Rana’s 2022 and Oboni’s 2013 agree that the annual number of TSF failures stayed relatively constant, despite a reported increase in the annual construction rate of TSFs. Rana’s 2022 states that the cumulative failure rate of TSFs declined over time. When assuming Rana’s lower-estimate of the number of constructed TSFs (6,810), they estimate a cumulative failure rate is ~4.4% by the end of 2020.

However, when adopting their upper-estimate (20,230 TSFs), Rana’s obtain a rate of ~1.5%. This value is in the same order as the corresponding rate of Large Reservoir Facilities (LRFs). We perceive this result as “strange”. Indeed the general perception is that hydro reservoirs are “safer” than tailings dams. At Riskope we believe this “strange” value is the result of an exaggeration of the TSF count and “mixing oranges and apples” in the TSF world-wide basket.

Let’s also note that some recent “advocate” papers seem to have inflated the number of dams in order to demonstrate the hazard. Actually, this move does not help their discourse because inflating the number decreases the rates. Hence an inflated number shows exactly the opposite than the desirable “advocate” result. One more thing: should the rate of tailings and hydro dams be “similar”, public opinion should be as worried by hydro than tailings. This is blatantly not the case nowadays. However, things may change as LFR age and slowly start crumbling under our eyes, world-wide.

Using the same Oboni’s 2013 data and converting them into the Rana et al. glossary definition we would have:

For benchmarking of dams, a standard procedure in the ORE2_Tailings™ quantitative risk assessment, compliant with GISTM, the annual failure rate is paramount. Indeed it allows to anchor results to factual reality. Furthermore we can tell clients if their dams are better or worse with respect to the world-wide portfolio performance.

The cumulative failure rate is not useful for benchmarking single dams as it is victim of bluntness due to “excessive averaging”, a point we discuss below.

Other “statistical studies” and estimates

Other statistical  approaches bear on the rate of failure, potential consequences and potential failure modes, Their discussions in 2018-2019 are present this blog as follows:

Thus, the benchmark values we use in ORE2_Tailings™ since 2014 are confirmed by the Rana’s 2022 paper as well as the other researchers referenced above. Worldwide tailings benchmarks ten years later is a success!

At Riskope we are reticent to use returns. That is because layman tend to understand return as “the next failure will occur in “so many” years”. This is not the only reason as we think the return is a general disservice to the public.

However, for the sake of comparison, we have picked a selected number of dams portfolios, with varying volumes, in various parts of the world. We analyzed these 57 dams for various clients using ORE2_Tailings™. They are a subset of the large number of structures we have evaluated to date using the same methodology.

Thus, not only the benchmarks are correct, but ORE2_Tailings™ results are proven to be realistic and well calibrated at world-wide scale. Furthermore, the returns yielded by the ORE2_Tailings™ analyses in our day-to-day practice also match the returns evaluated by Rana’s 2022. This constitutes another proof of the correct calibration of the methodology based, for example, on on more than hundred dams evaluated in our forthcoming paper at TMW 2022 . By the way, the title of our forthcoming TMW 2022 paper is Optimizing mitigation of tailings dams portfolios.

Averages needs to be taken with a grain of sand (pun intended).

As we have hinted earlier, one should consider averages with care because they tend to smooth out data. Thus, they depict an optimistic image of the whole portfolio. This hinders good mitigative decisions and overall management.

To illustrate this, we have prepared a graph of the annual probability of failure (vertical axis) for the three portfolios A, B, C and the global one (A+B+C selected portfolios) results. The graph depicts the Oboni’s 2013 min-max benchmarks and pre-catastrophic threshold as horizontal lines. For each portfolio we show: the min-max annualized estimated probabilities of catastrophic failure, the average, as well as the standard deviation range (blue bar).

We can observe the following:

We were very pleased to read in Rana’s 2022 their “Note that many TSF failures have been caused by multiple variables (our note: ORE2_Tailings Potential Failure Causality Analysis – Riskope). The proportional contributions of structural drainage deficiency and weather hazards as causative variables has increased, whereas that of seismic activity, embankment deficiency and unstable foundation has decreased.”

This note validates Riskope’s view that causalities rather than failure modes are important for risk assessment ( Why everything we know about Tailings Dams failure is wrong – Riskope). Furthermore, “slope methodologies” such as Silva Lamb Marr and its clones should be avoided. That is because they fail to explicitly capture essential aspects of a dam’s life such as:

We want to close this Worldwide tailings benchmarks ten years later blogpost by thanking Rana et al. for their outstanding academic paper (Rana’s 2022). This has indeed allowed us to prove the validity of the benchmarks we use in ORE2_Tailingstm. The confidence that the methodology is indeed well calibrated, world-wide has significantly increased thanks to them.