Some companies are seeing the market capitalization play yo-yo several times a week, if not daily.

Dendreon & Diebold shares most likely have been “victims” of computer programs that search out financial information, analyze it and “high-speed trade” it without any human involvement. Similar wider scale events occurred on May 6th when a massive sell-off erased 862US$ billion market capitalization in less than 20 minutes.

Algorithmic trading is the use of computer programmes for entering trading orders, with the algorithm deciding the timing, location, price and/or quantity of the order. 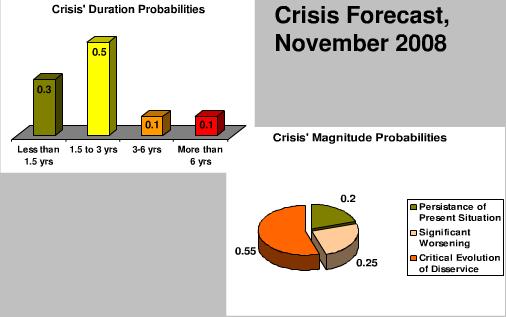 Algorithms are at war for profits against each other, Riskope’s Crisis prediction 2008

and Humans are just a casualty of war, small useless bystanders.

Of course one can still believe that markets’ sways occur because of manual trading, consumer confidence etc., but the truth is that we are no match to machines in an industry that executes transactions by the millisecond. At Riskope we have stopped using stop losses for our own investments: they are way too hazardous when executed at “investor’s speed”. By the time our stop-loss might be activated the stock may be down to the center of the Earth! We have come to the conclusion that we can tolerate the volatility, when we believe in the long term good sense of a stock position. We will not be enslaved by machines.

As the matter of fact, the use of software to analyze and trade within milliseconds on news from press releases, headlines and news stories has taken off only recently. Software are reportedly based on algorithms processing historical data, events or keywords that have pushed stock prices up or down in the past. Temporary price fluctuations have led some firms to install software that looks to profit by buying at the low point of a swing, which explains the sharp turbulences of intra-day pricing.

SEC reportedly plans to implement countermeasures such as halting trading when a stock rises or falls more than 10% in less than 5 minutes. Do you now how many milliseconds there are in five minutes? Just imagine what a machine can do in five minutes, and you will see why we, Humans, have to find different strategies for survival in our war against machines.

The 126 microsecond speed is “twice as fast” as its main international competitors, BATS Europe and Chi-X, two dedicated electronic rivals to the LSE, which are reported to have an average latency of 250 and 175 microseconds respectively. But many of the LSE’s older and more traditional rivals offer speeds of around 300 to 400 microseconds.

Beware, Humans, the new LSE Linux system will go online, on November 1st . Is that the day the “Collective” (remember Terminator’s Collective?) will launch its offensive?

This all looks quite like a science fiction movie, but it is not.

After predicting that the crisis would be long-lasting and deep, consequences would hit public services, public officers, generate high jobless rates, and finally lead to riots, we are now seeing “indignados” on the Brooklyn Bridge, Zuccotti Park, protesting at Wall Street (October 1st) and other financial districts even in the Almighty USA.

Jobless people against light-speed machines making decisions for a few “human owners”, or for themselves? Well these machines do not shoot flames and bullets like the ones in Terminator, but they will kill people for sure: depression, hunger, hopeless lives….and the machines and their masters (meanwhile there are some) will get richer and more powerful.

As you can see in the picture above, our 2008 crisis depth and duration prediction showed:

If we were to scientifically update our predictions now, based on factual data and new evidence, we would most likely find out a significant increase of the probability the crisis will last even longer.