80-20% rule in Risk Management practice: a way out of the overwhelming syndrome

80-20% rule in Risk Management practice: a way out of the overwhelming syndrome

Recently a client called us in to help determine the criticality of each element (division) of their business. They had developed a qualitative and indexed approach (FMEA/PIG risk matrix style). However they realized it neither yielded enough specific high quality information nor allowed sensible and informed decisions. We analyzed their system and found that the 80-20% rule in Risk Management practice: a way out of the overwhelming syndrome was true. More specifically they had difficulties in:

The qualitative and indexed FMEA risk record was over 400 records long. When we looked at those records, they spread roughly equally along the priority rankings (read as linearly distributed).
Quantitatively this yielded a weighted ranking of 140 for the FMEA records, meaning 37% of the “top” risks had the same weight of the remaining “low” 63%. Thus around one third of the risk were in each FMEA coloring category including the worst one, leaving management overwhelmed and decision makers with many unanswered questions.

In our experience that kind of confusion is pretty common when people deploy a FMEA.

In order to solve the situation for the client we applied the 6 steps ORE (Optimum Risk Estimates, ©Riskope) approach and found out the following:

ORE’s enhanced analytical and prioritization capabilities yielded a weighted ranking of 55 meaning (14% vs. 86% equilibrium, to be compared with FMEA’s 140 and 37% vs. 63%) as shown in the figure below, thus confirming the well known Pareto’s principle (20%-80%). 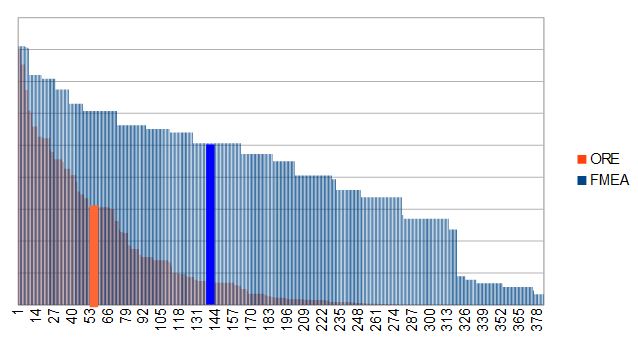 In the Figure the x axis shows the risks in the considered portfolio (numbered 1 to 400). They are sorted in the (y) decreasing value of the total risk for FMEA, respectively the intolerable part of the risk for ORE. As discussed above, the “average” ranking sits at 140 for FMEA, respectively 55 for ORE. ORE focuses the risks in a clear and unambiguous way leading to a better, more focused, risks prioritization.

Thus we avoided the client’s overwhelming syndrome and confirmed the applicability of the Pareto’s 80-20 rule to a risk (register) portfolio prioritized by ORE. Decision makers gained important insight and were able to move forward in a more decisive way. They allotted mitigative capitale exactly in the riskiest place. Hence they avoided wasting funds in un-necessary mitigations.

In the era of IoT (Internet of Things) data is becoming easier and cheaper to gather. Managers need to be able to decipher where and how to keep their attention.