Risk-aversion and near misses in mining

Risk-aversion and near misses in mining

A study in the Journal of Loss Prevention in the Process Industries explains the relationship between Risk-aversion and near misses in mining.

According to a recent study there is a link between near misses and miners’ attitudes toward risky behavior. Frankly, this does not sound like a surprising statement at all.

However the study from NIOSH develops a scientific understanding around the gut-feeling perception.

Risk-aversion and near misses in mining study

NIOSH surveyed more than 1,300 miners, a majority of whom were men ages 18 to 54, from 20 mine sites.  Researchers asked miners’ opinions about safety and health. Then they asked participants to rate statements related to their risk-taking habits.  The rating used a six-point Likert scale.

In addition, there were specific questions related to near misses frequencies over the past six months. The National Safety Council defines a near miss as “an unplanned event that did not result in injury, illness or damage – but had the potential to do so”.  High-risk industries should report near misses. Thus, a confirmation step via mining company reports took place.

In conclusion, the study shows that even small increases in risk-aversion behavior result in significant decrease in near miss probabilities.

Old understandings of near-misses and accidents

In 1969, Frank E. Bird, Jr. studied industrial accidents. He was interested in the accident ratio of 1 major injury to 29 minor injuries to 300 no-injury accidents brought forward in the 1931 book, Industrial Accident Prevention by. H. W. Heinrich.

Bird analyzed 1,753,498 accidents in 297 cooperating companies in 21 different industrial groups. The companies employed 1,750,000 workers for a total over 3 billion hours during the exposure period. 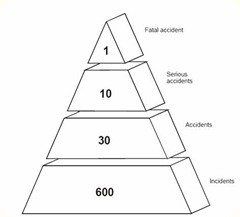 Like usual we advise to take these numbers with caution as they result from partial populations of workers and accidents.

What Bird’s study revealed is that near-misses have a link to the occurrence of major accidents.

Putting new and old together

Extant NIOSH research shows that the probability of future injury may rise with the number of near misses. Bird’s analyses linked near misses to more serious accidents.

Now we also know that risk-aversion relates to decreasing near misses.

In our risk assessments we always have a chapter discussing near-misses and loss history of the considered operation. That information is vital to evaluate scenarios of potential accidents, their likelihood and possible consequences. In Mining, a risk record-tracking near misses, incidents and accidents to allow “lesson learned” is indeed paramount.