Dam portfolio ORE2_Tailings support for decision makers follows-up on a prior example.

We will show how to interpret the graph we present in that prior post.

Dams probabilities of failure and ORE2_Tailings benchmarking at portfolio level.

The portfolio of ten dams is displayed on the annualized probability of failure graph, together with the world-wide benchmarks.

The evaluation shows dams BB1, BB2 and BB3 with an average annual probability and min-max estimates slightly above the highest (worse) benchmark. However, they display great potential for mitigation provided mitigation of ancillary water management issues.

Finally, AA2 and BB6 have high annual probabilities of failure, way above the world benchmark max. These dams also have great potential for mitigation, again, through ancillary water management enhancements.

Probability ranking is not sufficient to allow rational planning

This “ranking” is not sufficient for decision making as it does not show the risks.

To evaluate the risks we need to introduce the consequences of the failures of each dam.

Thus we get the following graph for the considered portfolio. The graph tells us that although they have similar probabilities of failure, dams AA2 and BB6 generate entirely different risks. 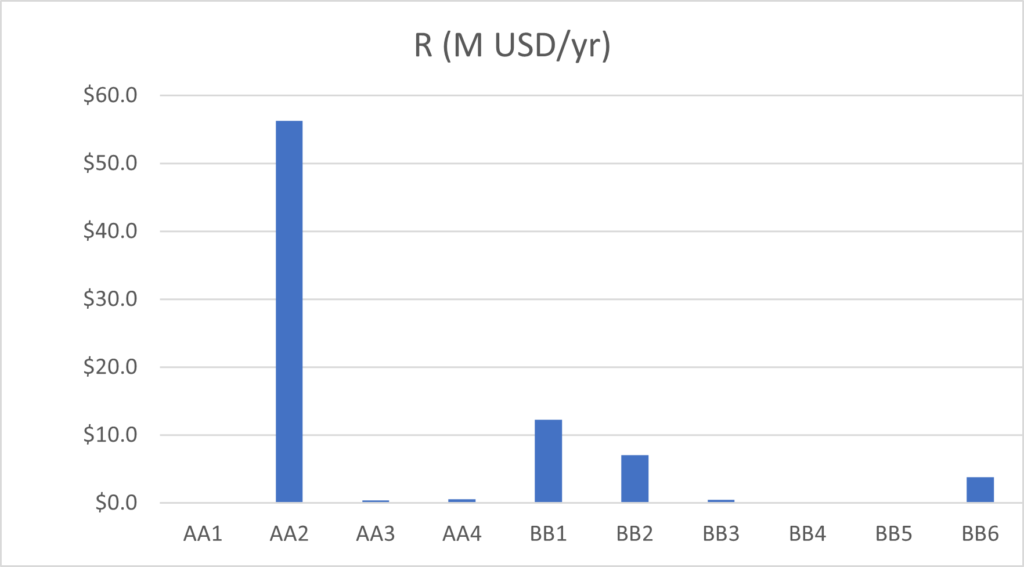 The right way to prioritize risks

For long time we have stated that the right way to prioritize the risks is to use explicit risk tolerance. In the graph below we report the same dams on a annualized probability of failure-consequence (pf-C) graph with two tolerances:

We can see that in this portfolio no dam is tolerable from an operation point of view. Thus, in this example, tailings dams failures are all a corporate matter.

We also see that dams BB3, BB5 and BB6 (one of the highest pfs!) are corporately tolerable. All the other dams are corporately intolerable! Thus we can say that the prioritization of the risk from top to bottom misleads its users on dam BB6 quite badly. Also it is evident that instinct and probability only prioritizations lead to blunders.

If we now look at the part of intolerable risk generated by the various intolerable dams, we get the figure below which shows that dams AA2, BB1, BB2 have the largest corporately intolerable risks.  Thus they should receive respectively 73%, 17% and 10% of the mitigative budget. So, the money allotted by the top-down approach to BB6 and the “minor risk dams” would be misallocated. Finally, as a result, the AA2, BB1 and BB2 dams would be left overexposed.

In many cases we have seen the “misleading results” are even more significant, and the hands-on everything “fix-it-all” approach really misguided.

In the next part of this series we will develop mitigative planning concepts further. Indeed we will show that within this portfolio and within the intolerable risk dams there are two families that should receive different treatments.