We designed ORE2_Tailings™  to support RIDM for tailings dams portfolios reliability enhancements. One achieves reliability by reducing failure likelihood to a certain level, and risks are tolerable. Thus it is necessary to clearly state what one considers the success of a structure within the portfolio. Indeed, unless we clearly define success, failure remains an ambiguous term. 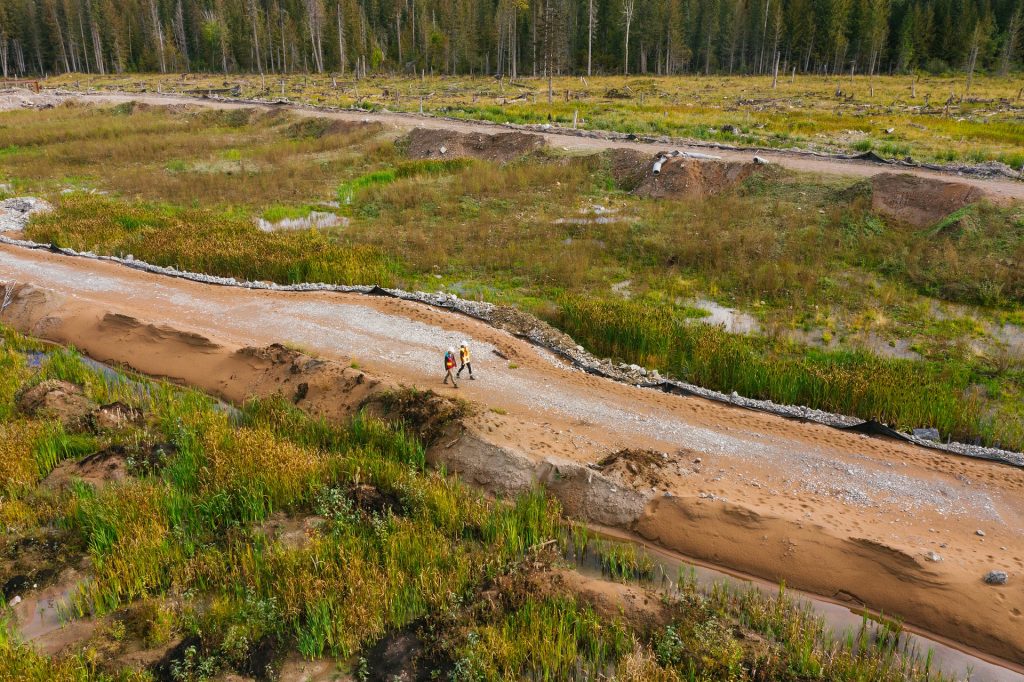 ORE2_Tailings™ considers a dam successful if it:

In case of special situations (e.g. in pit deposition) specific success/failure criteria will be developed. Also, if the client has already developed his own failure criteria, we will examine these and compare them, to allow seamless integration.

The nemesis of success is failure, expressed as a probability (pf). Failure can occur because of hazards, threats and conditions that are the causes of the failure. As risk assessors we focus on the causes of failure, whereas a designer would normally focus on the modes of failure (Failure Modes) which describe how a failure occurs.  Terry Eldrige (Golder) brilliantly explained this point during his Keynote Lecture at TMW2019. By knowing how a failure occurs, the designer can develop counter-measures. By exploring the causes (causality analyses included in ORE2_Tailings™) together with the risks, we can guide decisions on where and how to mitigate dam risks in the most effective way.

Riskope consider causality analysis a fundamental enhancement in the process. Indeed, it avoids a number of biases and arbitrary choices,

The probability of failure (pf) resulting from the composition of the KRIs/KPIs evolves all along the dam life while it maintains a certain level of uncertainties.

The algorithm follows the rule that failure is due to the compounded effect of various deficiencies. Some of these deficiencies are congenital defects that exist from project inception, e.g. too short boreholes, not enough effort put in the design, etc.

By doing so, ORE2_Tailings mimics the results of forensic investigations that have shown that dams fail because of the conjunction of various failure modes.

ORE2_Tailings™ considers looking only at credible scenarios constitutes a blatant censorship and should be avoided. Indeed, risk analysis should prioritize the scenarios, and no one should censor a scenario a priori. Indeed, the prioritization resulting from the risk assessment will take care of eliminating “incredible” or meaningless scenarios. They are a result, not an arbitrary decision!

When an expert says that a failure can’t happen, that a failure mode is “incredible”, it means that it is “unheard of” during the expert’s direct professional life and by hearsay. In addition, consider that if one takes ten experts and puts them together, the sum of experience will not alter considerably the final result: they may very well all agree, and erroneously, that a failure is “incredible” because their observation times were “simultaneous”!

Catastrophic failures have occurred at a rate of 3-4 per annum on average, over the last hundred years, and have been painstakingly collected and analyzed by researchers. Publications like ICOLD (2001), see the figure below, attempted to define “failure modes” for dams of different makes. The large number of “unknown” allows to appreciate the uncertainties embedded in the definition of the failure modes. Furthermore, if we consider for example the slope stability category, how do we know that those “slope stability” accidents did not mask, say, some erosion, seepage, foundation problems and perhaps a small earthquake the day before? How come there is no liquefaction?

Developing a correct taxonomy of the failure mode would have required detailed and complex forensic analyses that were, unfortunately, not performed. Even recent “statistical studies” and information collection efforts (Azam and Li, 2010) and Church of new England have shown the existence of information gaps that make censoring of failure modes a very doubtful practice. 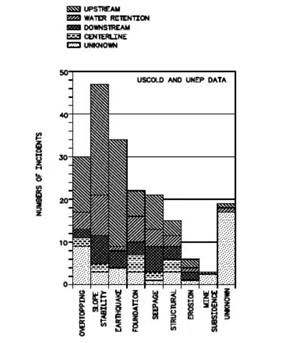 In recent years however, in the aftermath of some of those 3-4 failures per year, expert panels have developed detailed and scientific forensic analyses that generally, and we would say correctly, determine a “set of circumstances” that lead to failure. And those include numerous human factors that Failure Mode Analyses generally ignore. Furthermore, it becomes clear that is not one single failure mode that caused the deterioration of the dam, but a combination of triggers. A combination of “minor” failure modes that contributed to the failure of the dam or as many would say “a perfect storm”.

So, it becomes apparent that failure modes, and in particular “credible” failure modes, do not necessarily explain why failures occur. Again, it is correct for a designer to use Failure Modes to determine a priori counter-measures, but it is way better for a risk assessment to look at causality.

Failure modes explain, and not even completely, how a failure could occur under the influence of a very limited set of triggers. Forensic studies have shown that failures occur because of a set of causes. A dam may fail following an unstable slope failure mode, but the causes of that failure are way more complex.

Thus, as stated earlier, ORE2_Tailings™ does not look at failure modes and considers all the families of causality as potentially fatal to the dam, plus the deficiencies of the ancillary water management and other key components of the system outside the “dam body”. However, it is generally possible to create a connection between ORE2_Tailings™ causalities and the failure modes that engineers have considered. This allow to enhance the value of both approaches.

The ORE2_Tailings™ causality factors (sum=100%) for all the dam bodies in the considered portfolio will be evaluated. These causalities are derived for the dam body and do not consider the ancillary water management, decants, etc., the factors of safety value (but the completeness of the analyses of the dam developed to date) which enter later in the evaluation of the probability of factor of the dam system.

Furthermore, the causality analysis does not cover possible:

which will enter in the probability of failure and later discussions. The causality families we will evaluate are:

As stated above, the dam body causalities always add to 100% and the min-max value for any family are respectively 5% to 50%. That means that ORE2_Tailings™ considers that the preponderant cause of dam body failure cannot be more than 50%. Thus, the other causalities will share the balance, in compliance with post-mortem analyses.

This comparison opens a Pandora’s vase as there are many answers. We refer to CDA DAM SAFETY GUIDELINES 2007 (2013 Edition), and in particular to their Tables:

Let’s first focus on ancillary water management structures. Let’s assume the hypothetical considered dam is “perfect”, insofar it has not settled, the freeboard was designed and maintained properly, etc. Well, if that dam is vulnerable to overtopping, then its pf is approximated by the values of the flood return in Table 6-1A, 6-1B. That means a wide range of pfs going from 1/100 (10-2) to 1/10,000 (10-4).

The same reasoning can cover seismic events. Interestingly, if a dam has a pseudo-static FoS=1, then the probability of failure in that condition can be roughly estimated to 0.5 (50%, like a coin toss).

However, this probability has to be divided by the return (years). Thus, for example, with a return of 1,000 years the pf=0.0005=1/2,000 or 5*10-4 . This in turn allows to see that for most dams, especially in low seismicity areas, this condition alone is not necessarily significant. In our book entitled Tailings Dam Management for the Twenty-First Century (Springer, 2019) we show, however, that the combination of small seismic acceleration and related returns can result in odd results. For instance, smaller quakes being probabilistically more significant than larger quakes and their longer returns in terms of annual probability of failure.

We close by discussing CDA Table 6-2. Let’s examine a “PERFECT” hypothetical dam, one that has a clean and complete health record from:

Let’s also consider the dam is not in a seismic area and ancillary water management structures ensure a survival with a pf lower than the stability condition. In other words that means flooding will NOT be a problem, ever, for that dam. If that is the case, a dam with FoS=1.3 would have an ORE2_Tailings™ pf estimate in the order of 10-4 . An explanation of this is in our book “Tailings Management…”, page 158, Fig. 11.1 and Table 11.3. However, if the dam was instead poorly investigated, designed, etc. (i.e. the opposite of the prior example), then the ORE2_Tailings™ probability would raise to appx 1/4 = 25% (same reference as above). Identical factors of safety do not mean identical probability of failure!

If the client does not deliver their own consequence evaluations (for example, GISTM) we will build a consequence estimation. To that end we use the ORE2_Tailings™ built-in consequence, with the consequence metric shown below.

Following ORE2_Tailings™ the consequences dimensions of a dam failure that need to be considered include the following: