Today we present the review of Credibility Crisis, Brumadinho and the politics of mining industry reform. The authors of this book are A. Hopkins and D. Kemp, 2021. To be precise, we focus our discussion on the process and choices that finally shaped the GISTM, as the authors report them, rather that on the opinions the authors express. Indeed, as the book makes it clear, not all voices had the same weight during the process and the Panel deliberations. 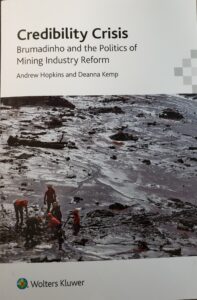 Overall, we found Credibility Crisis extremely informative and profound. That is especially as the book explains the processes, related politics behind the scenes and the forces interplay during the preparation of the ICMM GISTM.

For obvious reasons linked to our background and position in the tailings debate we will focus on Chapters 9 and 10:

However, we need to start with a quick review of a few points, to set the context.

The book is the story of the process leading to the publication of the GISTM. It reminds that GISTM intent was to ensure a disaster like Brumadinho would never occur again. Furthermore the terms of reference for the panel in charge of the process required the adoption of a consequence-based classification of dams. The reason the book invokes for this arbitrary choice is that, historically, the understanding of risk was confined to the probability, ignoring the consequences. We know that this may indeed be the case for some authors and studies. But the industry in general has adopted the proper definition of risk since at least two decades. That is the combination of probability and consequences , mirroring what has occurred in other hazardous industries.

Perhaps, had the Panel included a risk specialist, the Panel would have avoided some of these arbitrary statements. As a matter of fact we would consider the Panel members as “hazard specialists”, but not risk experts. The represented hazards were, beside the chair qualifications:

Themes of the book chapters

The book also discusses the relations between co-conveners, how the expert panel functioned, and how these shaped the final product. As each chapter analyzes a specific aspect leading to the GISTM publication, namely, the:

We found the debate leading to the definition of “catastrophic failure” and the “scope” particularly interesting. Because it highlights the need to foster very detailed and unequivocal glossary, a point we have highlighted throughout our career.

Chapter 9: the goal of zero fatalities

As stated earlier, the terms of reference for the Global Tailings Review asked for a global and transparent consequence-based TSF classification. The classification would include the expected number of fatalities, extent of environmental damage, infrastructure etc. We stress again, this was an a priori arbitrary decision with deep impacts on the future, some positive and some negative. The book reports the debates that occurred in trying to modify existing systems, such as ICOLD. It refrains from discussing any other consequence dimension than fatality number. Let’s also note that the consequence-based system would by definition ignore the probability of failure of the considered dam, another a priori arbitrary decision.

The book again highlights glossary difficulties: what does potential loss of life mean? Is it possible or probable? What is possible or likely/probable? Reportedly the panel also struggled with the ICOLD guidance stating that standards of construction should increase according to the fatality number. Here we think the book confuses the issues. Indeed, this does not mean this implies a greater tolerance of a smaller number of fatalities vs. a larger ones. We note that risk tolerance remains a vague notion through the GISTM, while its definition is invoked to justify the “position” of the ALARP point!

As a matter of fact a stricter construction standard means a smaller “allowed” probability of failure. And there are ways to ensure the risk to life (probability times fatalities) remains constant or even decreases. This is perhaps the point where the panel should have objected to the terms of reference had they had the support of a risk expert with the ability to argue away from poor a priori decisions. We also note that the discussion seems focused on new dams, and the huge portfolio of existing non active or closed structures is simply again dealt with an arbitrary decision. Treating them as “extreme”. This creates large portfolio of undifferentiated “extreme” dams. A nightmare in the making due to the lack of finesse of the proritization.

We certainly agree with the goal of ensuring that all facilities comply with the highest standard. However  we think the GISTM, based on a priori arbitrary decisions, is not as solid as it should be and will create undesirable “side-effects”.

The book then discusses risk acceptability and attempts to explain why reducing risks to determined acceptable levels is allegedly a flawed thinking. Incidentally, the glossary is again uncertain as tolerance and acceptability appear interchangeably. Nevertheless, the book adeptly makes a distinction between factual statements and normative ones. It does that by discussing, for example: “if the actual fatality rate among industrial workers is 1/1,000 per year, this must mean that society has accepted it”.

However, the book misses, for example the fact that one can set risk goals in better ways. For instance the aviation industry quite successfully managed harm to passengers (passenger risks) by setting “target levels of safety”. The aviation industry subsequently validated them and made them more stringent based on conditions. See: Lin, X., Fulton, N.L. and Westcott, M., 2009, October. Target level of safety measures in air transportation-Review, validation and recommendations. In Proceedings of the IASTED International Congress on Advances in Management Science and Risk Assessment (AMSRA 2009), Beijing, China (pp. 222-662).

The aviation industry never stated a zero harm to people goal because it:

The book also cites as an example the United Kingdom Railtrack Corporation tolerable level of risk for different stakeholders. It claims this to be an example of past statistics (the existing fatality rate) becoming normative. We do not know if that was the case, but would argue that when writing a new code (such as GISTM) we would have performed a risk assessment on the various stakeholder categories. We would have checked past statistics, and then considered the number of exposed people (say workers, commuters, etc.). The idea would be to maintain the risk level identical for all of these or allow transparent discussion leading to the informed consent we all should strive toward.

By doing this we would have implemented a process similar to the one actually followed by civil aviation (Lin et al., 2009). Incidentally, this would be an ethical way of dealing with acceptability rather than crossing arms and leave the decision to poorly informed “politics”.

This chapter starts with a confusing statement about “reducing the probability of failure so that the risk can be regarded as acceptable”. It then continues by saying that decision-making should not use assessment of risk alone, but should consider, independently the consequences. The language is somewhat confusing. Thus the book clarifies it by stating: if the consequences are severe enough, then no matter how low the probability, one cannot justify the construction of a facility. But what about the multitude of existing dams? And what about civil aviation? And chemical plants, nuclear reactors?

Unfortunately the book then delves into the obsolete concept of matrix, probability-impact/consequence graphs, PIGs the panel reportedly reviewed. We have already spent enough ink discussing how the industry should stop using these. Indeed they are dangerous and ultimately do not achieve adding clarity on risks. Actually, the problem is not rooted in using probability and consequences, but in using poor evaluation and representation techniques.

Finally the book uses the n-P graph Prof. Morgenstern referenced in a famous conference. From ” The Story of Quantified Risk and its Place in Slope Safety Policy in Hong Kong” by A.W. Malone (2005) we read the following:

“By the late 1980s the HSE had embraced the notion of public tolerability. ‘The opinion of the public should underlie the evaluation of risk’ (HSE, 1988: 1), where “Tolerability” does not mean “acceptability”. It refers to a willingness to live with a risk so as to secure certain benefits and in the confidence that it is being properly controlled’. “

“The tolerability of risk from nuclear power stations” (HSE, LC Paper No. CB(2) 1635/ 11-12(01), 1988 ) discusses the concept of individual and societal risk in detail. It might have offered interesting approaches to the Panel, driving the discussion away from obsolete risk approaches.

In Societal Risk Criteria for Loss of Life (Baecher, Abedinisohi and Patev 2015) we find detailed examples. These include a:

The same report also shows the Kinchin criteria (1978). It is interesting to see, a rare occasion indeed, a linear scale graph of “societal probability-casualties” using existing situation and an hypothetical “after improvements” situation (Figure A-4). Also, in the same section, Figure A-6 shows the difference between:

This comes again to show that it has been very clear for many authors that current levels of harm to people do not equate acceptable levels. Furthermore,  significant efforts happened world-wide, way before GISTM, to develop sensible tolerance/ acceptability thresholds.

From our understanding, the Panel received terms of reference that included a priori arbitrary decisions. These do not match the body of knowledge developed by authoritative institutions and entities dealing with hazardous industries since the ‘60s. The examples brought in the book do not give justice the enormous and successful effort that, for example, the aviation industry and others have consented to reduce harm to people. Setting risk tolerance thresholds brought that success.

As already stated in the past the Panel members did not include a risk specialist, and this contributed to a series of biases and unfortunate conclusions.

We agree with the book claim that the GISTM fell short of suggesting to have zero tolerance for some specific number of fatalities. Should the points above have been followed, the GISTM would have been more prescriptive and the industry as a whole, society would be in a better position.

Being more prescriptive would have meant defining methodologies to be applied, using refined targets and avoiding a slogan such as “zero harm to people” that risks to boomerang back on the industry and its investors.