Tailings risk correlations or lack thereof refers to a phenomenon we oftentimes encounter in ORE ERMs deployments in various industries.

The risk bubble in the p-C graph

The figure below shows a classic simplified result from a ERM. The quadrant is the probability (p), Consequence (C) quadrant with the addition of the risk tolerance band. The band has a width corresponding to the divergent opinion between optimistic and pessimistic key stakeholders on tolerance. 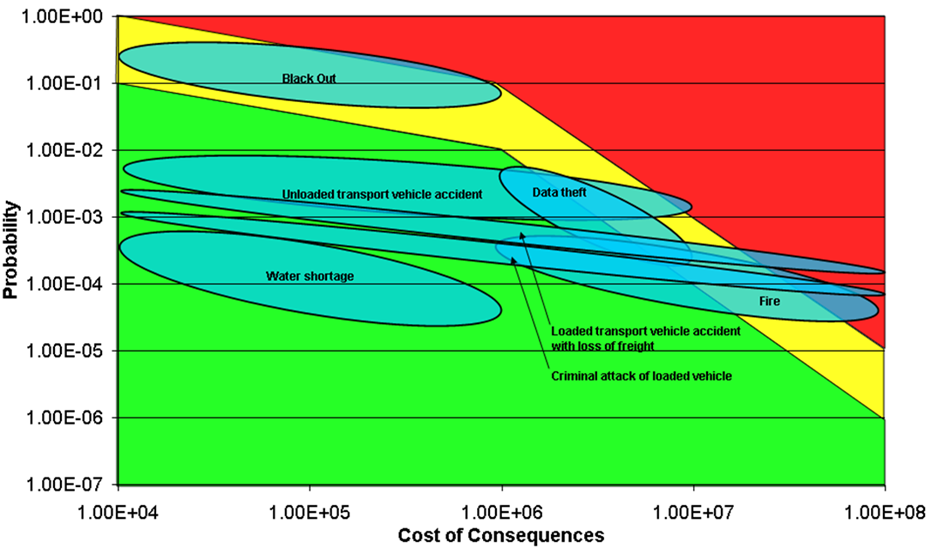 A given hazard has uncertainties on both the likelihood of occurrence and it consequences, or losses. In ERM studied we display it as a blue bubble. We call these the risk bubbles.

Indeed, oftentimes risks have significant inverse (negative) correlation between consequences and probability. A good example of this are car accidents: fender-bender accidents are way more likely than full loss of the vehicle.

In the case of tailings one can assume that probability of catastrophic failure and their consequences are rather uncorrelated at least at the standard level of analysis that data generally allow.

But why is that?

In general, the consequences of a catastrophic failure are not dependent on the probability of failure of the tailings dam. Indeed the quality of monitoring, design of the foundations etc. are independent from the consequence metric such as the population density downstream, land use (PAR, PLL), the topography, etc.

One could say now: “wait a minute. If I am building a dam today I will apply codes and engineering in such a way to reduce the probability if the consequences are high(er)”. Sure, that is true, but the discourse is a tad more complex if the notion of time is included.

On the probability of failure and Tailings risks correlations

if we add the notion of time, the dam risk could even display a (positive) correlation!

For the curious in 2015 we published a paper  “Risk Assessment of the Long-Term Performance of Closed Tailings Facilities”. It showed the effect of time on a closed structure under different scenarios. One scenario looked at downstream population increase and possible lack of care and maintenance of the dam. In that case, probability of failure and consequence could have a (positive) correlation. Therefore the risk bubble could be tilted higher to the right. A rather bleak outlook for the future.

Similarly in 2022 we published a paper :” Impact of climate change projections on tailings dams survivability “ which lead to the same conclusions on the risk bubble and risk correlation.

The observations above stress the need to optimize mitigative actions for single dams and entire portfolios. Rational quantitative ALARP analyses are key to optimize actions needed to address risk mitigation.